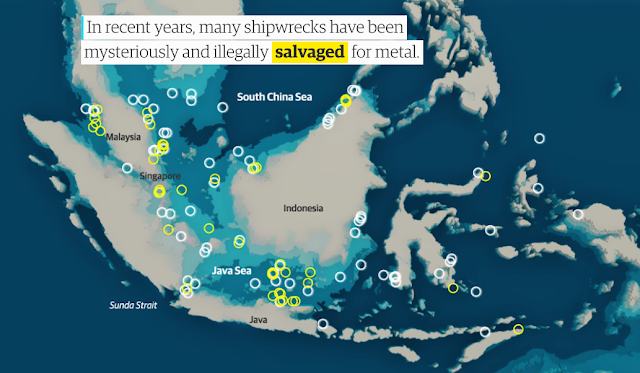 Reports of this have been appearing for several years, but The Guardian has just compiled a longread with excellent illustrations:


Dozens of warships believed to contain the remains of thousands of British, American, Australian, Dutch and Japanese servicemen from the second world war have been illegally ripped apart by salvage divers, the Guardian can reveal.

An analysis of ships discovered by wreck divers and naval historians has found that up to 40 second world war-era vessels have already been partially or completely destroyed. Their hulls might have contained the corpses of 4,500 crew...

The rusted 70-year-old wrecks are usually sold as scrap but the ships also contain valuable metals such as copper cables and phosphor bronze propellors.

Large “crane barges” have been photographed above wreck sites, often with huge amounts of rusted steel on their decks. At the seabed, divers have found ships cut in half. Many have been removed completely, leaving a ship-shaped indent.

Cambodian, Chinese and Malaysian-registered vessels have been spotted above shipwrecks. In some cases, their crews have been arrested. In one case, the looters had acquired a letter from a Malaysian university which said the work was authorised as “research”...

Archeologists believe the criminals might be turning a profit because the hulls are one of the world’s few remaining deposits of “low-background” metals. Having been made before atomic bomb explosions in 1945 and subsequent nuclear tests, the steel is free of radiation. This makes even small quantities that have survived the saltwater extremely useful for finely calibrated instruments such as Geiger counters, space sensors and medical imaging.
Some ancient ships, often centuries-old Roman vessels in European waters, have also been salvaged for their lead, which is also low-radiation and is used in nuclear power stations.