"The Corpse in the Waxworks" and "The Four False Weapons"

In two previous posts I reviewed the first three novels written by John Dickson Carr, each featuring the French detective Henri Bencolin. We now come to the final two of this rather small corpus of five Henri Bencolin mysteries.

"The Corpse in the Waxworks" is a conventional murder mystery set in Paris in the 1920s, with no locked rooms.  At several points in the story the author incorporates elements of a "action thriller," and he offers a somewhat melodramatic ending, so it is a bit unlike the iconic mysteries that Carr will craft in his more mature years.

It's a good story, and I have to admit the killer was (as usual) not on my mental list of likely suspects.
I won't be giving out any spoilers, and will just use this occasion to highlight some interesting tidbits encountered while reading the book:


"The legend, then, says that when [Bencolin] wears on these occasions an ordinary sacque suit, he is out for pleasure alone."


The sacque suit was the appropriate day dress for all men. The suits that had been worn before this time [1920s] were big, broad-shouldered suits and since men were striving for the more youthful look, they began wearing suits that were skinnier and did not have padded shoulders. The suit pants also went through a change too. Creases became a big thing, they were found on the front of pants. Another thing added to pants were cuffs and they drew more attention to their shoes. Both of these things were added to pants to give off a sharper look. Belts were also becoming popular to wear with pants, instead of wearing suspenders. The belts were said to be "waist-slimming." 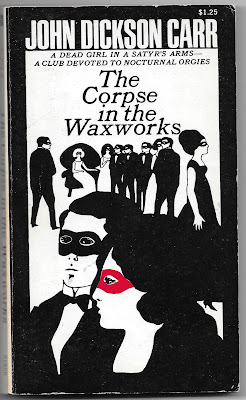 "In the brief weird glare I saw the gleam of black brilliantined hair..."


Brilliantine is a hair-grooming product intended to soften men's hair, including beards and moustaches, and give it a glossy, well-groomed appearance. It was created at the turn of the 20th century by French perfumer Édouard Pinaud... it consisted of a perfumed and colored oily liquid.

(Interestingly, when the movie Grease was shown in France, it did so under the title Brilliantine.)

"... a girl of nineteen or twenty, with vivacity in the dark eyes, soft full lips, and a weak chin... This was no midinette..." ("A female salesperson, a shopgirl, especially in Paris; a vacuous but fashionable young woman.")

"But Bencolin had seated himself facing the blaze, fallen into a study, with his gaunt figure slumped and his chin in his hand."  Lots of detectives seem to fall into studies - I think Sherlock Holmes must have done so on several occasions.  I understand they are thinking, but why they have to "fall" into this state is a bit puzzling.  Now that I think about it, one also "falls" asleep.  Odd.  No time to look this up.

"In this poetic way, Monsieur Bencolin would say that I am lord of the jackals - king of the cockleshells - high priest of demonology."  A phrase apparently borrowed from a popular turn-of-the-century play entitled "If I Were King."

"Streetwalkers, graven of face, with motionless black eyes..."  Don't know if this is to imply deathlike or immobile like a carved figure. ?

"I could see a glimmer of light through one window, whose leaves were open."  Makes sense, but I've never seen this usage.

"The Comte de Martel... wears an old-fashioned stock, eyeglasses on a black ribbon, a box-pleated cape..."  ??? - not sure what that means. [answer in Comments]

And finally - "The Four False Weapons."

Carr's first four novels were written in the early 1930s.  After he published The Corpse in the Waxworks, he tried out some other detectives - including seven Gideon Fell novels and five featuring Sir Henry Merrivale.  I'm going to break the chronological order here and skip forward to 1937, when Carr reintroduced Henri Bencolin for one final novel.

Before I had even finished the first chapter it was obvious how Carr had matured in his writing style in this five-year interval.  The narrative is much more readable, the characters better defined (crucial when trying to pick our a murderer from the bunch).  He reintroduces Bencolin as a "retired" detective who just happens to live in the vicinity of the crime.

Again, I won't address the plot, so as not to present spoilers for potential readers.  This sentence near the end summarizes the puzzle - "Pistol, razor, stiletto, and drug tablets; there were four weapons in the case, and all of them are false.  Rose Klonec died of..." (I would clarify that all the weapons were essential to the sequence of events, just not the actual cause of her death).

Now on to some selected curiosities:


"The most famous legend of the great Doctor Samuel Johnson is that Boswell once asked him, "Sir, what would you do if you were locked up in a tower with a baby?"  Johnson's reply is not noted in this narrative and it's been decades since I read Boswell's Life.  Does anyone know what his reply was?

"... slipping along the rue de Rivoli in one of those new, sleek, wine-colored taxis which have replaced the quacking cabs of old..."   Odd way to describe a cab.  ???

"Madame doses herself with sleeping-tables on the same night that she burns with impatience to meet her lover?  Whiskers to you!  You make me laugh."  The sense is obvious, but it's a curious phrase.  Anyone seen it before? 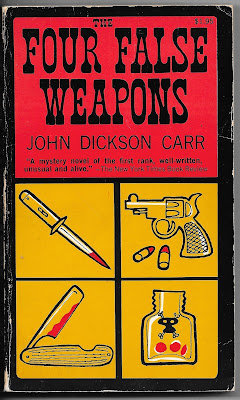 "Now that I've thrown my bonnet over the windmill, I want to see and do everything I can."  I found that as the name of a play from the 1930s.  Someone else may want to look up the implications.

"And yet the moment the goose falls out of the larder you apparently threaten me with criminal prosecution if I have any curiosity about a weapon found on the very scene of the murder."  ????? way too obscure for me.

""The old witch," Bencolin said at length, shaking his fist.  "The yellow-eyed Bubastes with the thirty-nine tails.  The swine-snouted polecat with the armor-plated hair," he amplified, defying the laws of zoology..."  Bubastes is a genus of beetles.  ????

"He was having his rolls and coffee by the window when the 'phone rang..."  With an apostrophe, to mark the absence of "tele."  Grammatically correct, of course, just odd.

"But, Although Doctor Freud is Distinctly Annoyed, I still haven't done anything yet."  Mr. Google found this for me:


The young things who frequent picture palaces
Have no use for this psycho-analysis.
And although Doctor Freud
Is distinctly annoyed
They cling to their old-fashioned fallacies.

Apparently limericks were fashionable in the 1920s, and this one was well-enough known to be highlighted with capital letters in the text of this novel. And I suppose "fallacies" is a pun on phalluses.

"But he knew that the bank [in a card game] must have lost heavily.  In any but a world of cloud-cuckoo-land De Lautrecs, the bank would have won..." Found this in Wikipedia: "Aristophanes... wrote and directed a drama The Birds, first performed in 414 BC, in which Pisthetaerus, a middle-aged Athenian persuades the world's birds to create a new city in the sky to be named Nubicuculia or Cloud Cuckoo Land..."

That's all (or at least that's enough.)  This was a complex mystery - perhaps a bit too much so.  The solution is explained in stages; several incorrect solutions are offered, each of which explains some details - unlike some Agatha Christie mysteries, for example, where everything is held back until the final reveal.

Thus endeth the John Dickson Carr mysteries featuring Henri Bencolin.  After he published this one he moved on to other detectives, which is what I'm going to do now.  These five books may or may not be available from your local library.  All five are available at Amazon for a combined $25 or so.