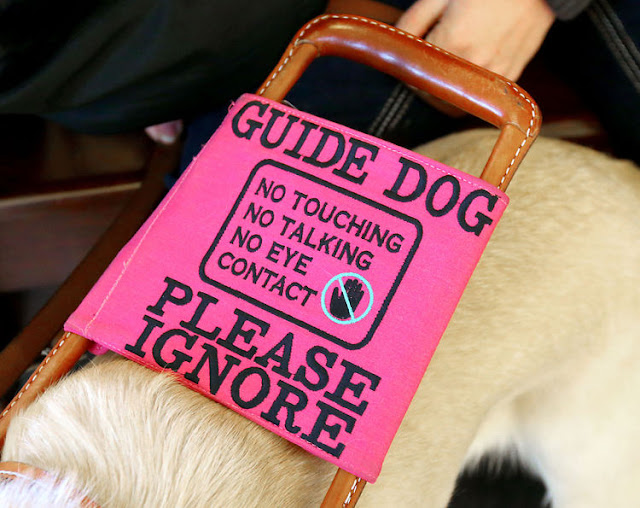 "Therapy dogs" are not the same as "service dogs" for the blind.

While it ensures their rights, the looseness of the law is a source of frustration for Freyseth and Johnson, who have been forced to contact police when untrained service or therapy animals have attacked their own dogs, which can be scarring to the animals and cause them to lose focus on the task at hand. A particularly traumatizing incident could render the dog unable to continue working, an especially harsh loss given the $40,000 and several months invested in training.

“The hardest part is when we run into fakes,” Freyseth said. “We don’t know where they are, and one attack can change our dog forever. I get scared.”

While unauthorized service capes and harnesses can be easily purchased online, Johnson says an animal’s manner is a clear indicator of its legitimacy. Growling, lunging, excessive barking and energetic playfulness are hallmarks of untrained animals, as is the language the owner uses for discipline.


When Marlin Jackson arrived at his row on a Delta flight from Atlanta to San Diego in June, the middle seat was already occupied by a man with a sizable dog on his lap. Jackson squeezed by them to his window seat, and the Labrador mix lunged at his face. The attack lasted about 30 seconds, according to Jackson’s attorney, and left him with facial wounds that required 28 stitches and scars that are still visible today.

The mauling, which Delta said was inflicted by a canine identified as an “emotional support” animal, was among the thousands of incidents that just pushed the nation’s largest airline to tighten rules for passengers flying with service or comfort animals.

Much more at the link and also at this article at PewTrusts.