The last survivors in iron lungs 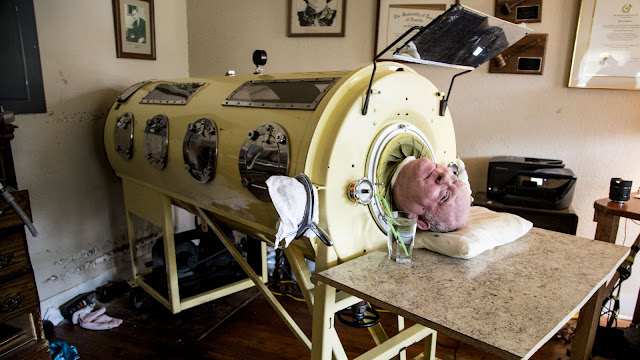 A report at Gizmodo describes the current lives of the last three persons in the U.S. known to be living in iron lungs.


Her iron lung has portholes and windows on the side; a pressure gauge at the top. The machine is actually cobbled together from two iron lungs. One, the March of Dimes gave her when she was a child. The other, she bought from someone in Utah, after she haggled him down from $25,000 to $8,000. The body has also been modified over the years. Her grandfather invented a motorized pulley system that closes the bed tray into the tank after she climbs in. He also replaced the brushed aluminum mirror above the neck slot with a real mirror so that she could have a clear view to the rest of the room when she’s locked in the canister. A local engineer used a motor from an old voter registration device to build a mechanism that tightens the collar around her neck after she slips her head through the portal. The fan belts and half-horsepower motor have been replaced about ten times.

When Lillard was a child, polio was every parent’s worst nightmare. The worst polio outbreak year in US history took place in 1952, a year before Lillard was infected. There were about 58,000 reported cases. Out of all the cases, 21,269 were paralyzed and 3,145 died. “They closed theaters, swimming pools, families would keep their kids away from other kids because of the fear of transmission,” Bruno said.

I was a participant in that polio epidemic of 1952, as were my mother and sister.  I woke up one morning and fell to the floor because my legs wouldn't hold me up, then spent months in Sheltering Arms, the Minneapolis Sister Kenny Institute before eventually returning home.  What separates me from the three adults in the story above is that the virus only reached my thoracolumbar spine, not the C-spine.