The amazing value of the walrus 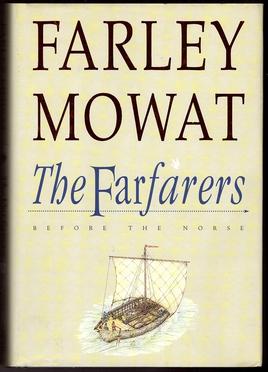 Excerpts from The Farfarers, by Farley Mowat (also published as The Alban Quest):


Up to fourteen feet long, superbly muscled, clad in a hide as tough as armour, adult walrus fear nothing in the ocean. Gregarious, and amiable except when roused in defence of kith and kin, they once lived in vast and far-flung tribes in all the northern oceans.

They have been known by many names. Eskimos called them aivalik; Russians called them morse; Scandinavians knew them as hvalross; Englishspeakers have called them sea-cows and sea-horses.

By whatever name, walrus have been a major source of wealth for human beings from dim antiquity.

One day in the museum of the Arctic and Antarctic Institute in Leningrad, a Siberian archaeologist handed me an intricately carved piece of yellowed bone. What did I think it was?

“Ivory, da. The hilt of a sword from an excavation in Astrakhan on the old trade route to Persia. But it is neither elephant nor mammoth. It is morse. You must know that for a very long time morse tusks were the main source of ivory in northern Asia and Europe. Sometimes they were worth more than their weight in gold.”

He went on to tell me of a Muscovite prince captured by Tartars whose ransom was set at 114 pounds of gold—or an equal weight in walrus tusks. This was no isolated example. From very ancient times until as late as the seventeenth century, walrus ivory was one of civilization’s most sought-after and highly valued luxuries. Compact and portable, the teeth in their natural “ingot” state served as currency or were carved into precious objects—some purely ornamental; some quasi-functional, as sword and dagger pommels; and some religious, including phallic symbols in fertility cults.

“The tooth of the morse,” the archaeologist continued, “was white gold from time out of mind. There was nothing: no precious metals, gems, spices, no valuta more sought after. How odd that such hideous monsters should have been the source of such wealth.”

Wealth derived from walrus was not limited to ivory. The inch-thick leather made from the hides of old bulls would stop musket balls and offered as much resistance to cutting and thrusting weapons as did bronze. For tens of centuries it was the first choice of shield makers and their warrior customers.


The hide had other uses as well. Split into two or even three layers, it made a superb sheathing for ships’ hulls. A narrow strap, cut spirally from a single hide, could yield a continuous thong as much as two hundred feet in length. When rolled into the “round,” such a thong became rope as flexible and durable as that made from the best vegetable fibres, and it was a good deal stronger. In fact, walrus-hide rope remained the preferred cordage and rigging on some north European and Asian vessels until as late as the sixteenth century.

Although walrus are today restricted almost exclusively to Arctic waters, they were formerly found in Europe south to the Bay of Biscay and, in the western Atlantic, as far to the south as Cape Cod. However, as people became more numerous and more rapacious, and as walrus ivory steadily increased in value, the more southerly herds were exterminated, one by one...

Getting the feel of the job, Poole’s crew [in 1603] killed about four hundred walrus and sailed home with eleven tuns of oil and several casks of tusks. When they returned to Bear Island the following year, they were professionals...

Within eight years of Poole’s first visit to Bear Island, thirty to forty thousand walrus had been butchered, and so few remained as to be not worth hunting.

An even worse slaughter took place in New World waters, especially in the Gulf of St. Lawrence, where every year more than 100,000 sea cows hauled out on the beaches of the Magdalen Islands alone...

Up to 25,000 walrus were killed each year on the beaches of the Magdalen Islands during the 1700s.