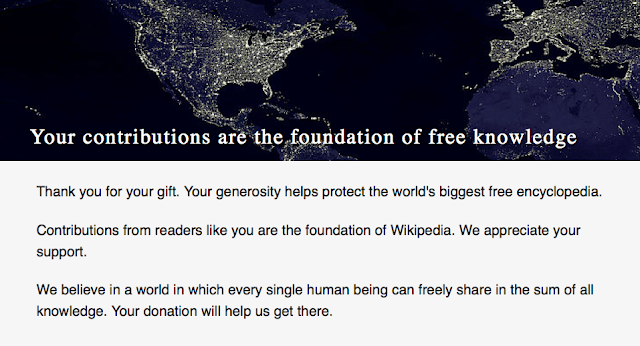 [from 2009] This blog uses Wikipedia extensively as a quick source for reference material. We therefore made a contribution this morning to their annual fund drive. When we did so last year [2008] one reader sent us a list of the Top 10 Reasons Not to Donate to Wikipedia. We have read that list and elected to repeat our contribution this year.

Addendum: I don't know whether the following is worth moving "above the fold," but I'll give it a try. In response to my initial post above, I received the following admonishment -

Previous year's cash overage that was stuffed into the bank: $3 million.

Last year's cash overage that was stuffed into the bank: $6 million.

Thanks to donors like you with no more independent thought than a sheep within a flock, you just helped the Wikimedia Foundation stuff even more money into the bank, and NOT spend it on the program services that you "thought" it would be spent on.

I can't help it if you're stupid.

Now I'm a thrifty person in a thrifty family. We drive two cars that are combined 25 years old with a quarter million miles on them. We don't like to throw money around. But we generously tip servers in restaurants and donate to selected charities and otherwise disperse our money appropriately in response to received value. I made what I consider to be a rather modest contribution to Wikipedia/Wikimedia as a token of thanks for saving me hundreds of hours of searching the net for information.

The primary argument at the anti-Wiki link seems to be that too much of donated money goes into the pockets of Jimmy Wales, Amazon, Google, and other corporations because of excessive salaries and referred business. Mr. Wales makes $400K. So what? Good for him. There are a hundred college football coaches who make more than that.

I found the football coach salaries just now in 5 seconds using Google. Google gets some of my paltry donation? Fine. Great. I Google every day of my life. Amazon? They can have some money. Why is someone so concerned re my giving money that he takes the time to write a message on my blog to reprimand (and try to insult) me???

Perhaps it's not just the money. There are allegations that Wikipedia "pollutes the minds of children" because they have articles about... sex. Someone writing the anti-Wiki material has gone to great length to collect all of the salacious Wiki entries in one place (nudge, nudge, wink, wink, know what I mean...) Perhaps if Wiki were eliminated, then all these aberrancies of behavior would disappear from life? From the internet? Children could get their information from schoolmates instead?

There are inaccuracies in Wikipedia! Really??? Not as reliable as the Encyclopedia Brittanica? Control of the information is in the hands of a few selected editors who perhaps have personal agendas they wish to promote? The Illluminati of cyberspace?

I'm not going to waste any more time on this rebuttal. There's a whole new day's worth of new stuff out there for me to search for blogworthy topics. Bye now.

Addendum:  Reposted from 2009, after making a contribution for 2012.  TYWKIWDBI also made contributions in 2010 and 2011, but I think this old post best explains the controversy.

Addendum:   Reposted yet again for 2015, because I continue to make modest annual contributions.  Some readers have suggested I put a "tip jar" on TYWKIWDBI.  Personally I'd prefer that you send such donations to Wikipedia.  (p.s. - for completeness, here are this year's counterarguments).

Addendum:  Reposted yet again, to encourage readers to follow my example.

Addendum:  Reposted for 2022, for the same reason.