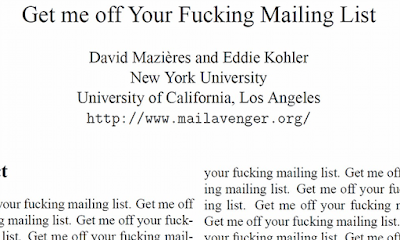 
An open-access “predatory” academic journal has accepted a bogus research paper submitted by an Australian computer scientist titled Get Me Off Your Fucking Mailing List.

The paper, originally written by American researchers David Mazières and Eddie Kohle in 2005, consisted of the title’s seven words repeated over and over again.

Dr Peter Vamplew, a lecturer and researcher in computer science at Federation University in Victoria, submitted the paper to the International Journal of Advanced Computer Technology earlier this year after receiving dozens of unsolicited emails from the publication and other journals of dubious repute.

“There’s been this move to open-access publishing which has often meant essentially a user-pays system,” Vamplew said. “So you pay to have the paper published and it’s available to the public for free.”..

Vamplew said he submitted the paper expecting the journal’s editors would “read it, ignore it, and at best take me off their mailing list”.

Weeks later he received good news: “It was accepted for publication. I pretty much fell off my chair.”

My career was in the academic world, including doing peer-review of manuscripts submitted to several professional journals.  There is a role for open-access publications in the scientific community, but they are subject to all sorts of abuse.  Some people in academia (or those pretending to be so) pad their curriculum vitae with "publications" that have never been peer-reviewed and have no scientific credibility.  It's also a way for corporations or politicians or anyone who wants to sway public opinion to bring fake "facts" to the public's attention.  These journals may also contribute to the public's distrust of "scientists" and "researchers."

The story above happened in 2014.  Here's a more recent example, also reported in The Guardian:

The nonsensical paper was accepted only three hours later, in an email asking Bartneck to confirm his slot for the “oral presentation” at the international conference.

Further details at The Guardian.