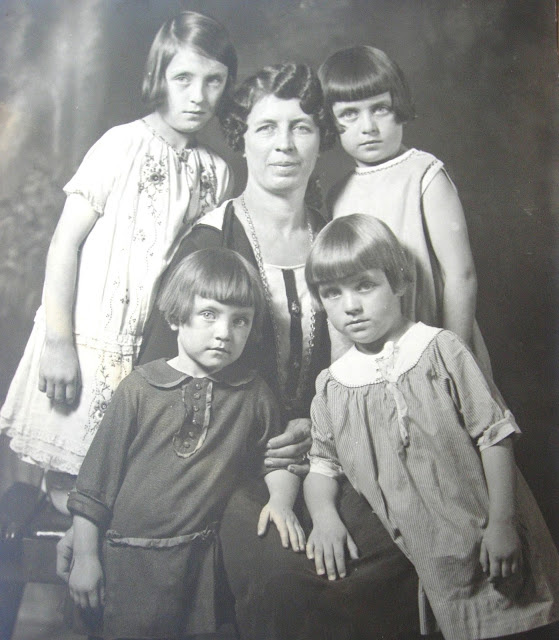 In the 1920s and 1930s, Selma Finseth (nee Distad) raised seven children on a family farm in south-central Minnesota.  Her parents had emigrated to the United States from Distad, a small village on Norway's Fjaerlandfjord - a northern branch of the Sognefjord.

In the 1980s three members of our family visited some very distant relatives in the Fjaerlandfjord.  They kindly copied a lineage for us from a family bible -  a complex tree of Distads, Olsons, Endresons/Andresons, and Torsons back to Endre Distad (my great-great-great-great-great-great-great-great grandfather, born in 1623).  The Distads and other Norwegian families had followed the biblical injunction to be fruitful and multiply, but the arable land in Norwegian fjords limited the degree to which family farms could be subdivided to future generations, so in the mid-1800s the Distads and many other Scandinavians joined a diaspora to the fertile farmlands of frontier America.

Selma married Knut Olaus Finseth and settled in to family life in Goodhue County in south-central Minnesota.  She was determined that her children would be "Americans," not Norwegians, so she forbade the speaking of Norwegian in the home (except when the parents wanted to keep secrets from the children).   In about 1927 she gathered her four daughters for a family portrait (clockwise from upper left: Ona Thilla Finseth, Edith Gertrude Finseth, Sylvia Beatrice Finseth, Marian Agnes Finseth).


"Selma told the girls to put on their summer dresses and to stay clean while waiting for the arrival of the photographer. Well, little Marian (who described herself as the maverick of the family) decided to climb a tree to look inside the robin's nest and climbed back down in a dirty dress. Selma instructed her to go and put on her winter dress, which is what she is wearing in the photo. "

The guiding principles were a strong Christian faith (and Lutheran doctrine), a devotion to family, and hard work.  That work began as soon as children were able to walk; the first chores for a small child would be to take a basket around the farmyard and barns to find where the chickens had hidden their nests, and gather the eggs for breakfast.  Edythe Finseth remembered proudly her contributions as a youngster.


"She wore a huge bonnet in the summer sun, so that neighbors said it looked "like a big hat was driving the rig." She learned to drive that team of horses in a straight line so the cultivating tines wouldn't disturb the planted corn. She was 8 years old at that time."

Those girls and their brothers lived through the Great Depression, served in WWII, married, and scattered around the United States.  After Sylvia Beatrice Finseth married and raised her own family, she went back to school to study for an M.A. degree.  One course requirement was the writing of an essay, for which she chose to profile her mother Selma.  That essay is reproduced below, not just to archive a family history, but to offer to some interested readers additional insight into the daily lives of farm families of that era: 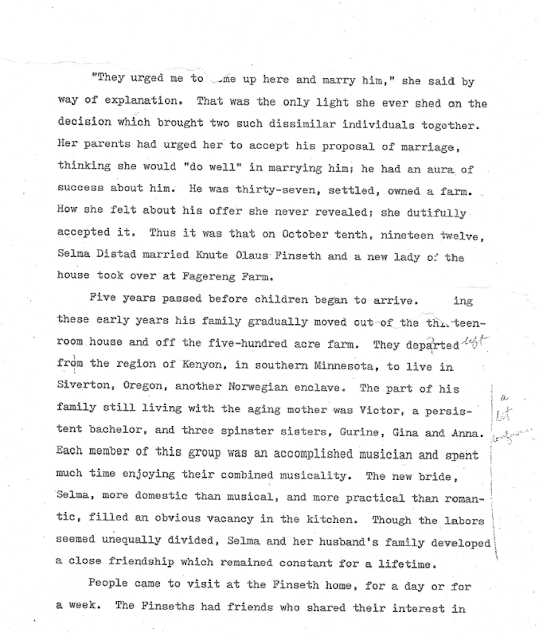 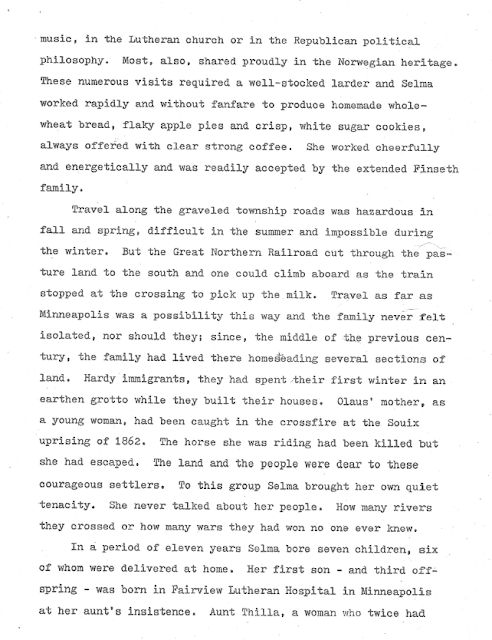 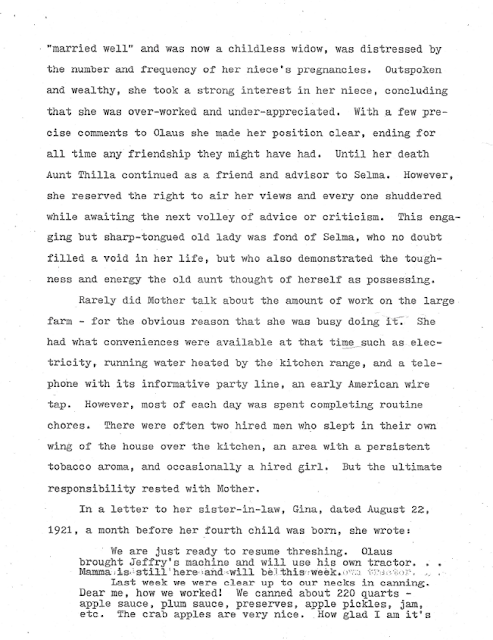 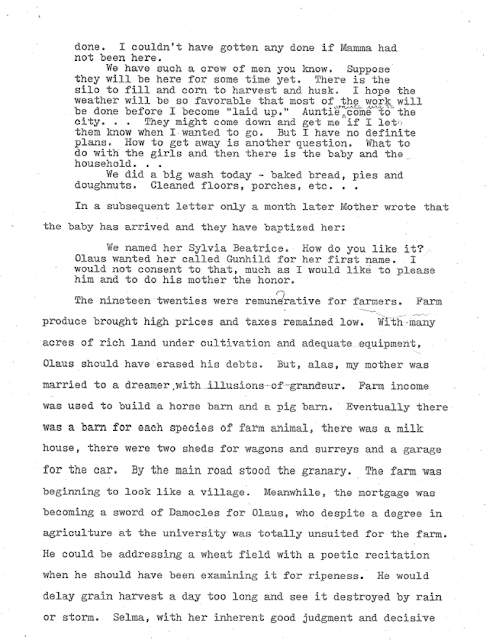 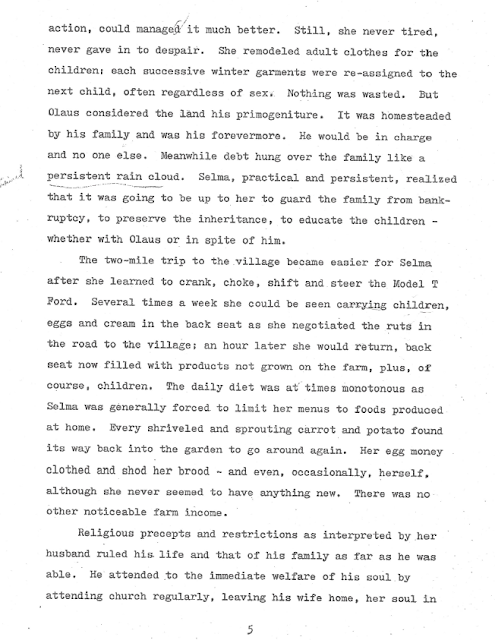 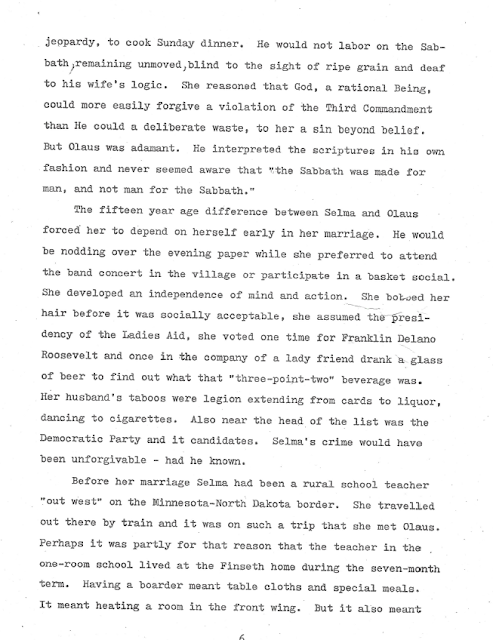 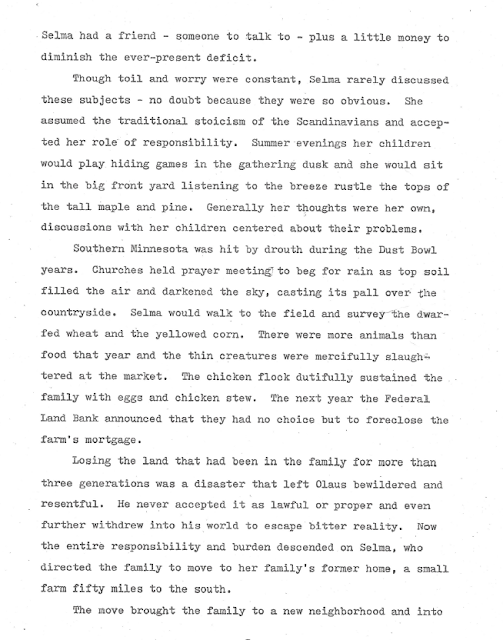 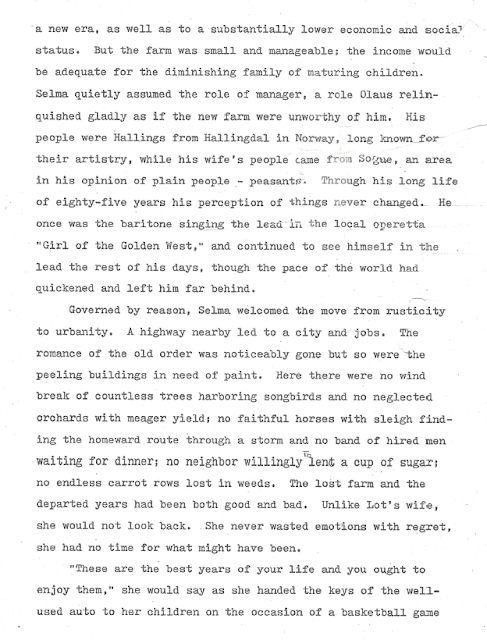 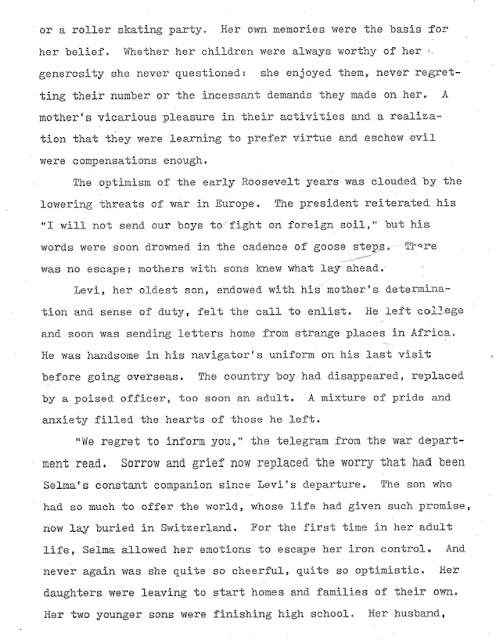 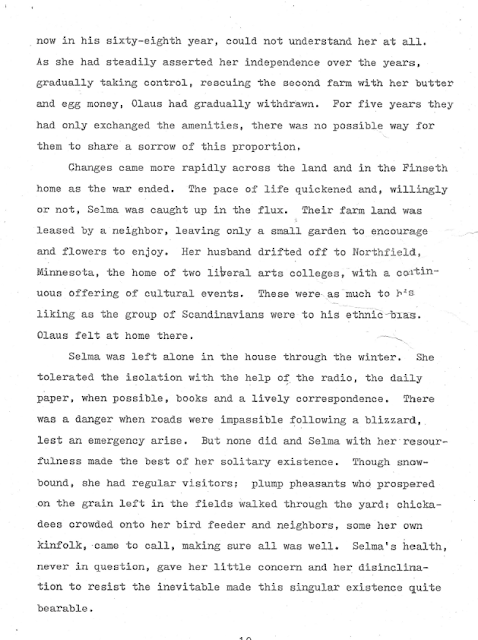 (last page larger not for emphasis but as a result of the photocopying process).

Selma Finseth's job in Chicago was as a housemother for female students in a nursing school.  She eventually retired to a room in a Minneapolis hotel, and died in 1964 at the age of 74.  She was justifiably proud of the successes of her children, and would be even more pleased and amazed at the diversity and achievements of the next two generations.

Addendum:  When I originally posted this story, I inadvertently omitted the 7th page of the text, which dealt with the Dust Bowl years and the foreclosure and loss of the family farm.  A big hat tip to a reader who noticed the discontinuity in the text.  Fixed now.