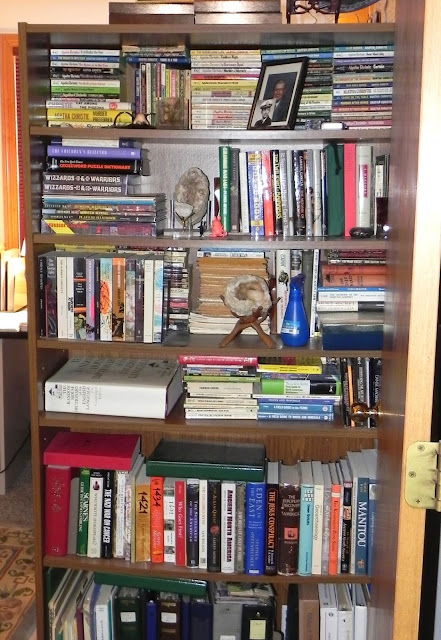 This summer I received an unexpected phone call from Charlie, my roommate of 40 years ago, who
called to tell me that he was getting married.  He was a bit startled when one of my first questions was whether he and his new bride had considered the question of "marrying their libraries."

My question arose because I had recently been reading Anne Fadiman's delightful 1998 book Ex Libris: Confessions of a Common Reader.  I'll let her explain:


A few months ago, my husband and I decided to mix our books together. We had known each other for ten years, lived together for six, been married for five. Our mismatched coffee mugs cohabited amicably; we wore each other's T-shirts and, in a pinch, socks; and our record collections had long ago miscegenated without incident, my Josquin Desprez motets cozying up to George's Worst of Jefferson Airplane, to the enrichment, we believed, of both. But our libraries had remained separate, mine mostly at the north end of our loft, his at the south. We agreed that it made no sense for my Billy Budd to languish forty feet from his Moby-Dick, yet neither of us had lifted a finger to bring them together. We had been married in this loft, in full view of our mutually quarantined Melvilles. Promising to love each other for richer or for poorer, in sickness and in health—even promising to forsake all others—had been no problem, but it was a good thing the Book of Common Prayer didn't say anything about marrying our libraries and throwing out the duplicates. That would have been a far more solemn vow, one that would probably have caused the wedding to grind to a mortifying halt. We were both writers, and we both invested in our books the kind of emotion most people reserve for their old love letters. Sharing a bed and a future was child's play compared to sharing [our books]...

By far the hardest task came toward the end of the week, when we sorted through our duplicates and decided whose to keep. I realized that we had both been hoarding redundant copies of our favorite books “just in case” we ever split up. If George got rid of his beat-up copy of To the Lighthouse and I said goodbye to my genital-pink paperback of Couples, read so often in my late teens (when Updike’s explorations of the complexities of marriage seemed unimaginably exotic) that it had sundered into a triptych held together with a rubber band – well, then we would clearly have to stick together for good. Our bridges would be burned.

Charlie's response to my question was that he and Susan had blended their libraries long ago, so I knew then that their marriage was destined for success.

The embedded photo, btw, is of a bookcase in my home office.  I used that image in the introductory post for the series of about 40 posts I wrote featuring bookcases and libraries in the homes of readers of this blog.  It is a wonderful collection of eclectic libraries, and well worth your perusal.  Maybe I should fire up that topic again with more photos and stories from recent readers.