Beach sand is not a permanent feature 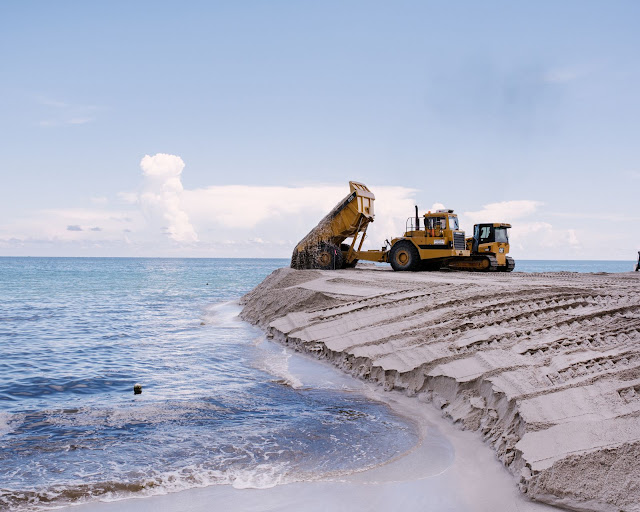 From an interesting longread at TheVerge:


To the casual observer, the beach may look like the only natural bit of the city, a fringe of shore reaching out from under the glass and pastel skyline. But this would be false: the beach is every bit as artificial as the towers and turquoise pools. For years the sea has been eating away at the shore, and the city has spent millions of dollars pumping up sand from the seafloor to replace it, only to have it wash away again. Every handful of sand on Miami Beach was placed there by someone.

That sand is washing away ever faster. The sea around Miami is rising a third of an inch a year, and it’s accelerating. The region is far from alone in its predicament, or in its response to an eroding coast: it’s becoming hard to find a populated beach in the United States that doesn’t require regular infusions of sand...

"There isn’t a natural grain of sand on the beach in Northern New Jersey; there is no Miami Beach unless we build it," Young says. "The real endangered species on the coast of the US isn’t the piping plover or the loggerhead sea turtle. It’s an unengineered beach."..

On July 31st, 2015, the Army Corps released a plan for patching eroding sections of Miami Beach. Miami-Dade’s sand resources had been exhausted, the Corps wrote, and some of the best alternatives lay to the north, offshore of Martin and St. Lucie counties. Though the shoals were in federal waters and the northern counties had no greater right to them than anyone else, they viewed the sand as theirs, and with the Corps’ announcement began the latest skirmish in what local officials call "the sand wars."..