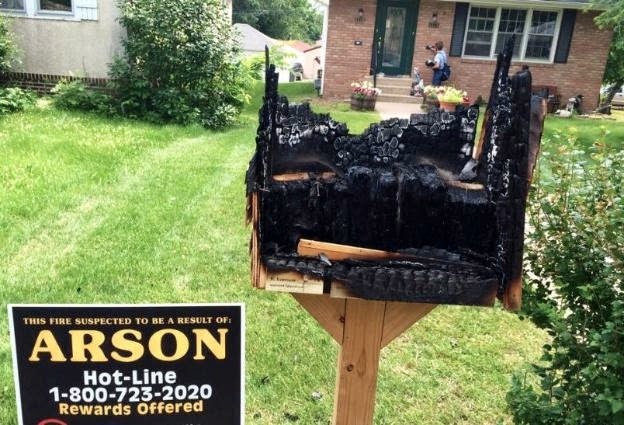 "A reward of up to $5,000 is being offered to help police throw the book at whoever torched a “Little Free Library” — a wooden house-shaped box atop a post — along a residential street in south Minneapolis...  Anyone with information is urged to call the Minnesota Arson Reward Project at 1-800-723-2020.

There are more than 12,000 Little Free Libraries around the world, a movement started in 2009 by Todd Bol and Rick Brooks of Wisconsin when Bol built a model of a one-room schoolhouse as a tribute to his mother, a former teacher who loved reading."

Reposted from 2014 to note that some people are now stealing books from Little Free Libraries in order to resell them:


But about two months ago she noticed her little library had been cleaned out, which was unusual. This has since happened more than a dozen times. Gladhill restocked each time, but soon found her large inventory of giveaway volumes in her Summit-University residence depleted.

“Our Little Free Library has been totally pillaged,” she lamented on Facebook this week. “I think we’re going to close it down for awhile, which bums me out.”..

Across the Twin Cities, others who have put up free-book stations have seen them emptied — sometimes repeatedly — in recent months...

It’s a mystery who is doing this, in many cases, and why — though there is speculation the books are being stolen to be sold.  Rhone has, in his own case, confirmed this by subtly marking books and later finding the volumes on the shelves of local used-book stores.

Stamping the books — often inside the front cover or on the first page — is said to be critical, based on the assumption that the volumes are being stolen to be sold off at places like Half-Price Books.

The Dallas-based used-book store chain said it has trained its staffers to turn away people who attempt to offer clearly stamped volumes.