Yemen in a nutshell 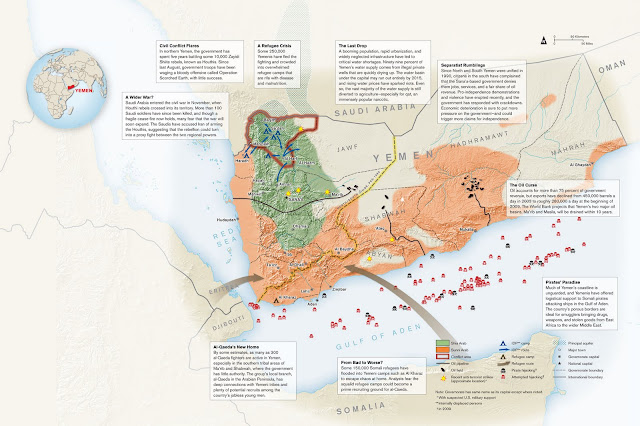 At the heart of all these problems is Yemen’s looming economic collapse. Already the poorest country in the Arab world, Yemen is rapidly depleting its oil reserves and lacks any options for creating a sustainable post-oil economy. Unemployment is estimated at 35 percent, higher than what the U.S. faced during the Great Depression.

Accelerating the economic decline is a protracted civil war in the north between Shia insurgents and the Sana’a-based government. The war has caused a refugee crisis and extensive damage to infrastructure...

The map/graphics embedded above is excellent - click for bigger to read the details.

No commentary from me; I'm just posting for future use/reference.

Reposted from 2010 to add the following from an article by Andrew Cockburn in the Sept 2016 issue of Harper's:


Just a few short years ago, Yemen was judged to be among the poorest countries in the world, ranking 154th out of the 187 nations on the U.N.’s Human Development Index. One in every five Yemenis went hungry. Almost one in three was unemployed. Every year, 40,000 children died before their fifth birthday, and experts predicted the country would soon run out of water.

Such was the dire condition of the country before Saudi Arabia unleashed a bombing campaign in March 2015, which has destroyed warehouses, factories, power plants, ports, hospitals, water tanks, gas stations, and bridges, along with miscellaneous targets ranging from donkey carts to wedding parties to archaeological monuments. Thousands of civilians — no one knows how many — have been killed or wounded. Along with the bombing, the Saudis have enforced a blockade, cutting off supplies of food, fuel, and medicine. A year and a half into the war, the health system has largely broken down, and much of the country is on the brink of starvation.

This rain of destruction was made possible by the material and moral support of the United States, which supplied most of the bombers, bombs, and missiles required for the aerial onslaught. (Admittedly, the United Kingdom, France, and other NATO arms exporters eagerly did their bit.) U.S. Navy ships aided the blockade. But no one that I talked to in Washington suggested that the war was in any way necessary to our national security. The best answer I got came from Ted Lieu, a Democratic congressman from California who has been one of the few public officials to speak out about the devastation we were enabling far away. “Honestly,” he told me, “I think it’s because Saudi Arabia asked.”