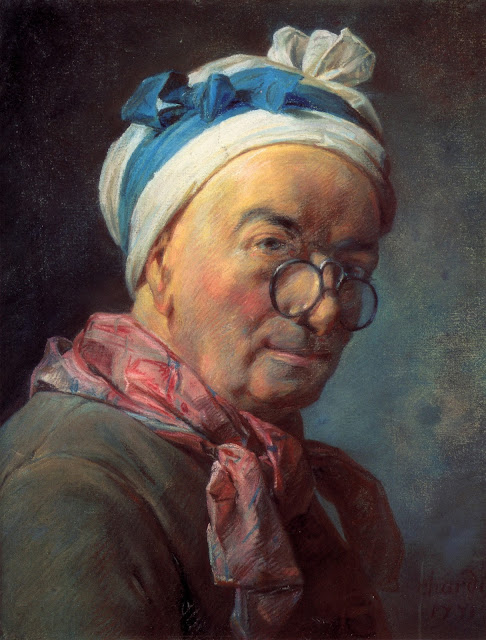 "For the true artist, as for the natural scientist, every type is interesting, and even the smallest muscle has its importance. If you do not like seeing old people whose features lack some dignified or delicate regularity, old people whom age has pitted and reddened like rust, go and see, in the pastels gallery, Jean-Baptiste-Siméon Chardin’s self-portraits from when he was seventy. Above the enormous spectacles that have slipped down his nose, which they pinch with their brand-new lenses, his worn-out eyes turn upward in his diminished gaze, seeming to have done much looking, much bantering, and much loving, and to declare with a tender flourish: Hé bien, yes, I am old. Flecked with the gentle dimness of age, they have still kept their flame. But his eyelids, like clasps that have been overused, are fatigued, their rims red. Like the old garment that envelops his body, his skin has hardened and faded. Like the fabric, it has kept and almost heightened its pinkish tones, and is glazed here and there with a kind of golden nacre. And the wearing out of the one always recalls the worn tones of the other, these being the tones of all things nearing their end: dying embers, rotting leaves, the setting sun, clothes worn thin, and men who pass on, infinitely delicate, rich, and soft. It is astonishing to see how the creasing of the mouth is exactly governed by the aperture of the eyes, which also dictates the wrinkling of the nose. The slightest fold in the skin, the slightest protrusion of a vein, is the faithful, meticulous translation of three corresponding sources: the character, the life, and the emotion of the moment.

The carelessness of Chardin’s attire, a night bonnet already on his head, makes him look like an old woman, and, in another pastel of himself that Chardin has left us, approaches the droll outlandishness of an elderly English tourist. From the eyeshade pulled well down on his forehead to the Masulipatnam scarf knotted around his neck, everything makes you want to smile, without any thought of hiding the fact, at this old eccentric who must be so intelligent, so crazy, so gentle and docile in accepting this raillery. Above all, such an artist. For every detail of this formidable and careless outfit that equips him for the night seems as much an indication of taste as it is a defiance of propriety. If the Masulipatnam scarf is so old, it is because the old pink is softer. When you see the pink and yellow knots seemingly reflected in the pinkish-yellow skin, and recognize in the blue edge of the eyeshade the dark gleam of the steel-rimmed spectacles, your initial astonishment at the old man’s surprising garb melts into gentle delight and the aristocratic pleasure of finding, in the apparent disorder of an elderly citizen’s dishabille, the noble hierarchy of precious colors and the order of the laws of beauty..."

Text by Marcel Proust (1871–1922), from an essay included in Chardin and Rembrandt, which will be published next month by David Zwirner Books, via Harper's Magazine.