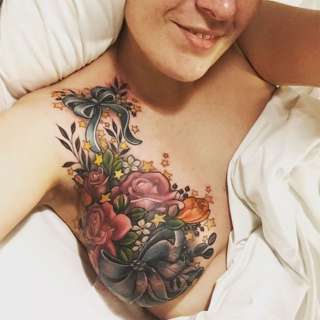 As reported by the BBC:


Just 36 years old when the cancer struck, Alison, from Sydney, knew that, along with a good portion of her hair, she would lose her nipple and suffer extensive breast scarring in a lumpectomy. But the idea of recreating a nipple through plastic surgery didn't appeal to her. "I didn't want a fake nipple made from some other piece of flesh. I thought I'm just going to get a tattoo," she says...

After extensive deliberation, she settled on a New Zealand-based artist named Makkala Rose, a 24-year-old with a bold and colourful illustrative style.  The tattoo was applied in Melbourne during a gruelling 13-hour session on 1 July this year. Alison, happy with the result, posted a photo of her design to Instagram and Facebook...

"Because there's no nipple, I can blast it everywhere all over Facebook and Instagram, and they can't censor it, which I think is really funny," Alison says.

Post-mastectomy and lumpectomy tattoos have been gaining popularity in recent years. Although women of all ages are choosing tattoos over breast reconstructions, they are particularly popular among younger women.

See also my post in 2013: Medical nipple tattoos vs. "titoos"