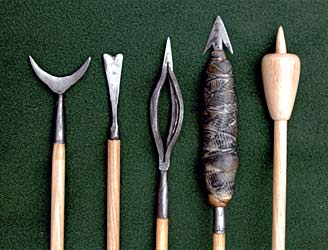 I had recently read in a Smithsonian article that Commodus (Marcus Aurelius Commodus Antoninus Augustus) enjoyed shooting the heads off fowl using "crescent-shaped" arrowheads, so I tried looking it up.

The Friends of Dudley Castle has a webpage about ancient weapons.  The crescent-shaped arrow was real:  "The first two arrows are crescent-shaped arrows used for hunting birds and small game. A bodkin-type [needle-shaped] arrow could pass through the wing feathers of a bird in flight, but the crescent would take out a substantial section of the wing, bringing the bird to the ground."

So it was developed to hit the wings of birds in flight.  But as for severing the neck of a bird - that's another story:


The first four attempts only just missed, but I noticed that the fletchings were actually brushing the neck of the bird on its way past. When I retrieved the arrows from my target (that was positioned just behind the carcass), I noticed that the arrowhead entered the foam target Boss with the blade running vertically...This then suggests that it may well be true that Commodus slew the Ostriches in such a bizarre manner, but how well could anyone judge the correct distance for the spin, and actually hit the bird when it was moving?

So the crescent-shaped arrow rotates during flight. The author goes on to discuss whether such arrows were used effectively to cut sails and rigging during naval battles.  Those interested can continue reading at what amounts to a definitive website on warbow archery, in an article written by the Chairman of the English Warbow Society.

Of equal interest I thought were the other arrows shown in the first image:


The next two are fire-arrows, both used for setting fire to wooden and thatched buildings and were used against enemy ships.
* The first has a basket into which a piece of red-hot charcoal is inserted. The speed of an arrow travelling at approximately 120mph causes the charcoal to ignite.
* The next arrow is wrapped round with linen fastened with a copper wire. The linen has been soaked in "Greek Fire", a substance which is very difficult to extinguish. An acid solution, such as vinegar or stale urine, had to be used to put the fire out.
The final arrow is known as a blunt arrow, used for target practice and hunting small game. The large, bulbous head would kill pheasant, partridge and woodcock, which could be hunted legally.