Gleanings from The Pickwick Papers 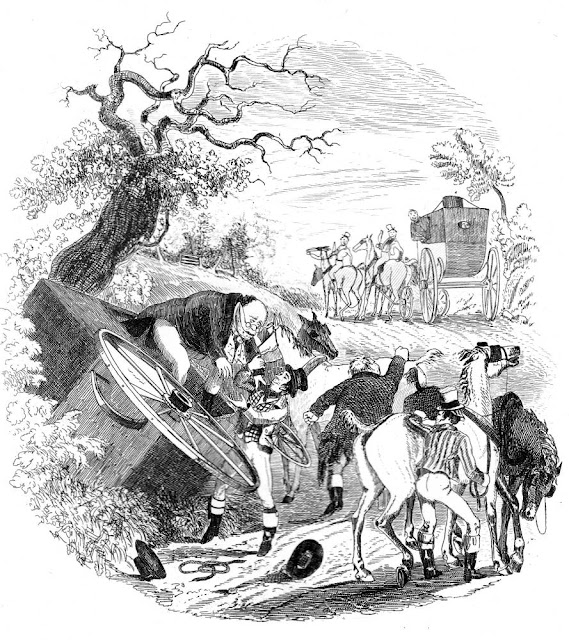 I've recently returned from a four day trip, during which I had time finally to read the 900 pages of my paperback copy of Dickens' The Pickwick Papers.  I have kept that book on my shelf since the 1960s, primarily to be able to cite the many references to Joe ("the fat boy") as an example of obstructive sleep apnea.   It's quite a remarkable first novel, written at age only 24 (am I the only person who reflexly pictures Dickens as an old man, even though he didn't start out so?)  I'll defer the sleep apnea references for now in order to share some other observations from the book.

The etymology of "fall" as a season seems intuitive, but I've never seen the term fleshed out in full detail like this:


"My uncle's great journey was in the fall of the leaf, at which time he collected debts..." (from "the story of the bagman's uncle" in chapter 49).

The term reportedly came to denote the season in 16th century England, as a contraction of Middle English expressions such as "fall of the leaf."


This was the first time I've seen the word "fellow" used as an insult (chapter 15):

One dictionary lists this as a secondary definition: "A man without good breeding or worth; an ignoble or mean man."


The phrase "... man is fire and woman tow" implies that "tow" is flammable material.  I found it listed as a secondary meaning: "An untwisted bundle of fibers such as cellulose acetate, flax, hemp or jute.

Other new words (for me):

Embedded image scanned by Philip V. Allingham and posted at The Victorian Web.