He secured the heads of rabbits and frogs so they remained motionless and were forced to stare at windows or gas flames. After the animals had gazed at these objects for hours, Kühne cut off their heads, removed the eyes, and dissected the halves containing the retinas. To fix the rhodopsin, the light-sensitive tissue was hardened in an alum solution and then immersed in sulfuric acid in a dark room. 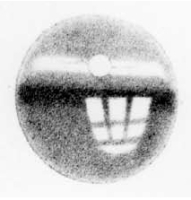 Kühne’s best-defined retinal images came from his rabbit experiments in 1878. He secured rabbits so that they were forced to stare at windows in the daylight. The resulting optograms were so distinct that individual windowpanes could be seen on the right side of the retina.

But optography was problematic for forensic investigations. Kühne conducted hundreds of experiments, and even in the most ideal circumstances most optograms were hazy and quickly faded. He also discovered that the eyes had to be removed very quickly after death otherwise the eye started to decompose and images couldn’t be retrieved...

Despite the objections of doctors and detectives early on, optograms were used occasionally in forensic contexts in the 20th century...