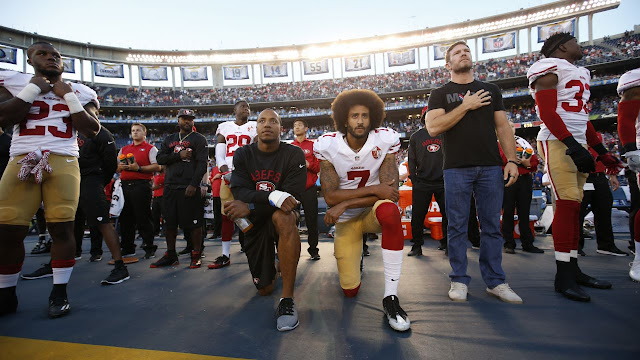 Today the beginning of the regular season for the National Football League coincides with the anniversary of 9/11.  Displays of patriotism will be everywhere.  This is a good time to post some excerpts from an essay at Moyers & company:


When the national anthem is playing at stadiums, fans don’t immediately drop what they are doing and stand to attention. Many unsubtly check their phones. Many are out buying hot dogs and beer (and don’t flinch in the line when the song begins). Many use the anthem as a chance to go and take a leak before kickoff. So, what? They’re all Kaepernick-esque traitors? (And, while we’re at it, let’s ask TV stations to zoom in on the owner’s luxury skyboxes during the national anthem to see exactly what is going on in there....)

This was all about sensitivity and feelings, we were told, and knowing when and where to make a stand so as not to offend the delicate, silent majority. We respect your right to voice an opinion, Colin, but won’t you think of the children?!? And what place could be more overflowing with sensitivity than an NFL stadium?