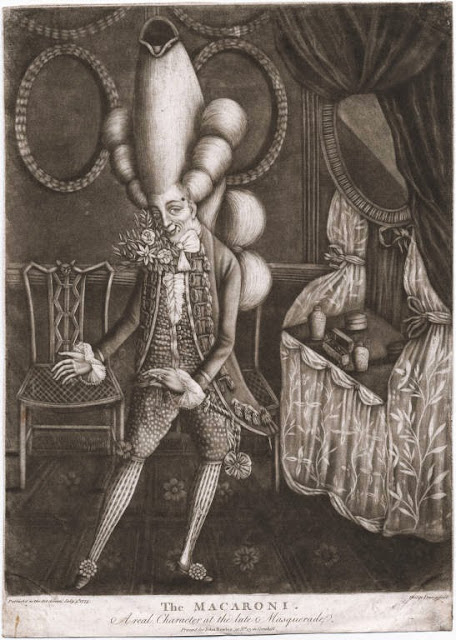 Yankee Doodle went to town
Riding on a pony;
He stuck a feather in his hat,
And called it macaroni.

Traditions place [the origin of Yankee Doodle] in a pre-Revolutionary War song originally sung by British military officers to mock the disheveled, disorganized colonial "Yankees" with whom they served in the French and Indian War...

The Macaroni wig was an extreme fashion in the 1770s and became contemporary slang for foppishness. The Macaronis were young English men who adopted feminine mannerisms and highly extravagant attire, and were deemed effeminate. They were members of the Macaroni Club in London at the height of the fashion for dandyism, so called because they wore striped silks upon their return from the Grand Tour - and a feather in their hats.

Above text from the Yankee Doodle entry at Wikipedia.  Image and the following from the related macaroni page:


The term pejoratively referred to a man who "exceeded the ordinary bounds of fashion" in terms of clothes, fastidious eating and gambling. Like a practitioner of macaronic verse, which mixed English and Latin to comic effect, he mixed Continental affectations with his English nature, laying himself open to satire:


There is indeed a kind of animal, neither male nor female, a thing of the neuter gender, lately [1770] started up among us. It is called a macaroni. It talks without meaning, it smiles without pleasantry, it eats without appetite, it rides without exercise, it wenches without passion.

The macaronis were precursor to the dandies, who far from their present connotation of effeminacy came as a more masculine reaction to the excesses of the macaroni...

Young men who had been to Italy on the Grand Tour had developed a taste for macaroni, a type of Italian food little known in England then, and so they were said to belong to the Macaroni Club. They would refer to anything that was fashionable, or à la mode, as 'very maccaroni.'

More at the lilnks.  Idea from a Reddit thread.