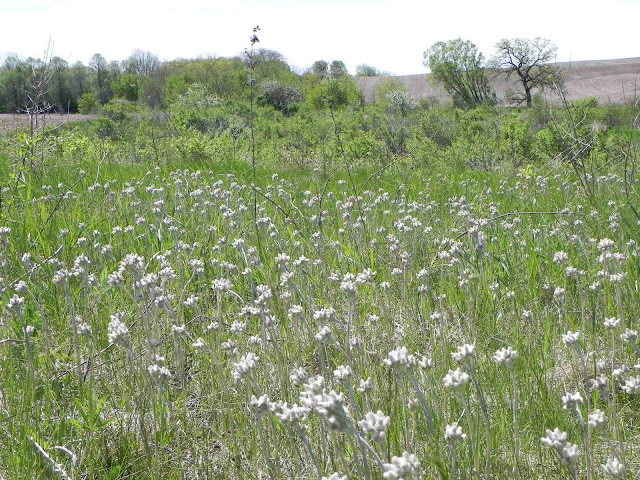 [This post is a compilation of three articles I've written over the past two months about the life cycle of the American Lady; I decided it made more sense to combine them into one megapost.]

American Lady butterflies (Vanessa virginiensis) are not uncommon; the real challenge is to document an entire life cycle, starting with the egg.  To do that, one has to locate one of the food plants for the caterpillars - Pussytoes, Pearly Everlasting, or Burdock.  Here in Wisconsin there's lots of burdock, but in the early spring it's also easy to spot Pussytoes (Antennaria spp.) because they thrust their fuzzy cats-paw-like flowers above the other vegetation on long stems.

Finding the eggs is a challenge.  The upright stems do have small clasping leaves, but the American Lady prefers to oviposit on the rosette of basal leaves next to the ground, and those leaves tend to be obscured by grasses and low vegetation. 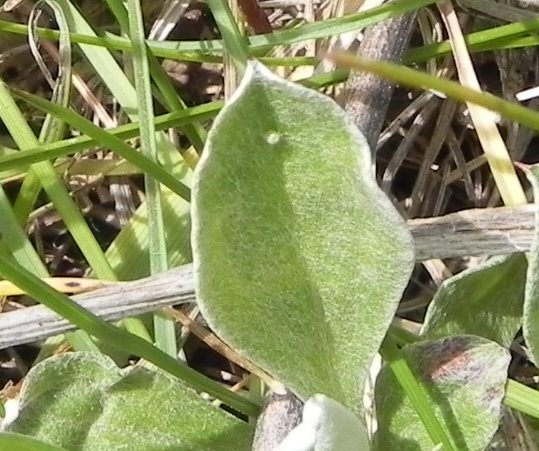 The egg is tiny and well-camouflaged, because it is green and almost translucent.  Most of the ones I have seen have been single, on top of the leaves, in the midline, and about a cm from the tip - like the one in the photo above.  At the Butterfly Garden forum at Gardenweb I've read reports of Ladies ovipositing on the flower stem or head, but have never seen a photo of such or found one myself; it would be a real challenge to locate an egg in that complex flower structure.

On closup view the egg looks like a little gooseberry - 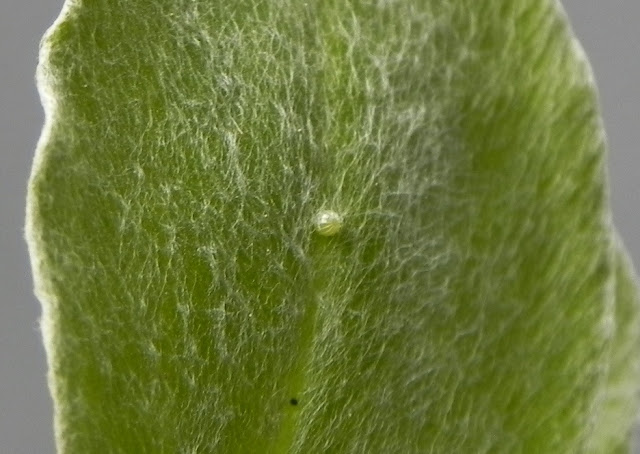 - with some vertical striations that resemble the old-fashioned candy root-beer barrels, similar to those of another Vanessa (the Red Admiral), whose eggs are shown here. 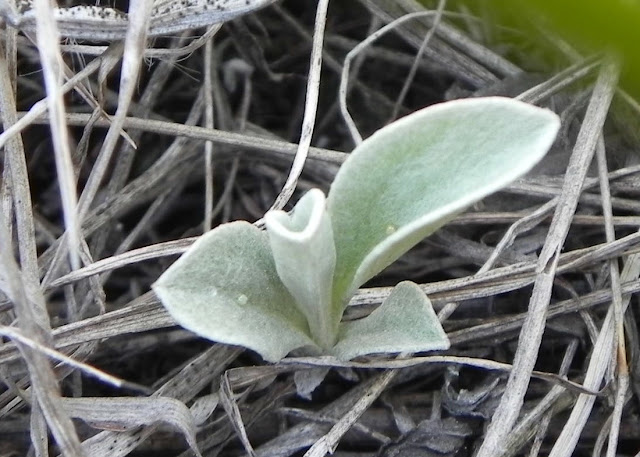 The photo above shows a pair of eggs on two leaves of a small pussytoes plant.  After the first instar emerges, he may eat the eggshell itself: 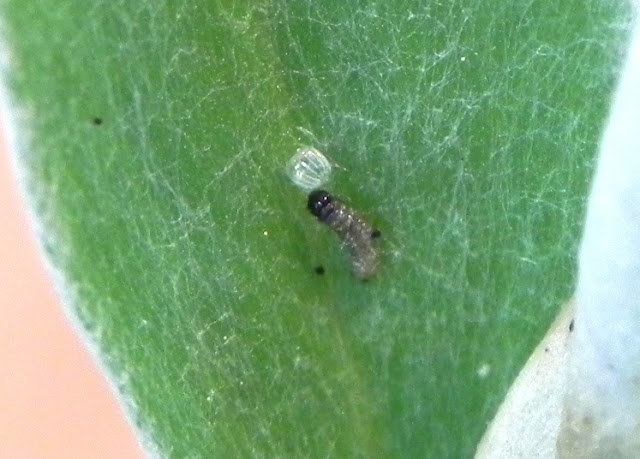 I've not observed that process, but it's a well-known phenomenon with other species.  The first instar has a semi-translucent body and is very difficult to see except for that black head.  Without the aid of a macro lens, the first obvious evidence of hatching is a "scraping" of the superficial layer from the leaf: 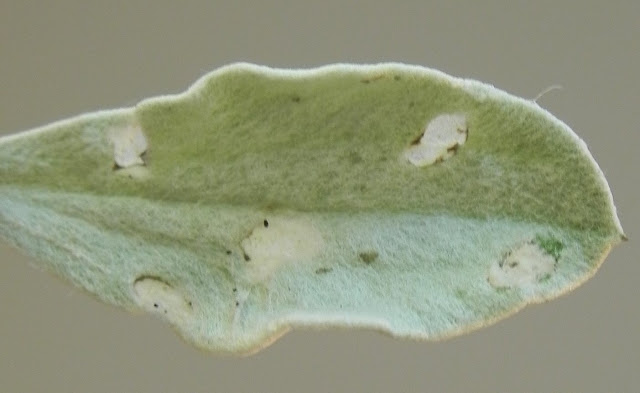 The caterpillars of many (?most) species eat through the leaf, typically from the edge.  The American Lady cat leaves a layer of cells, as can be seen when the leaf is backlit: 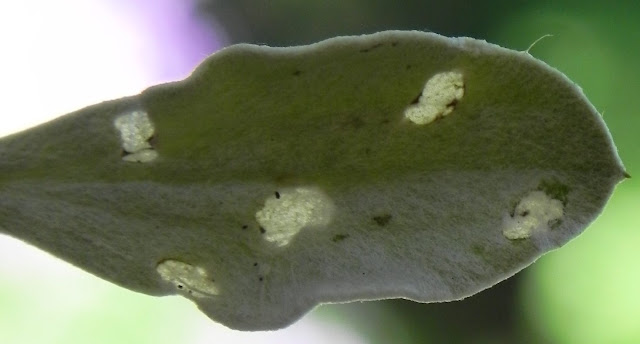 If the cat leaves the leaf (or is killed by a predator), the superficial lesions heal to leave small scars: 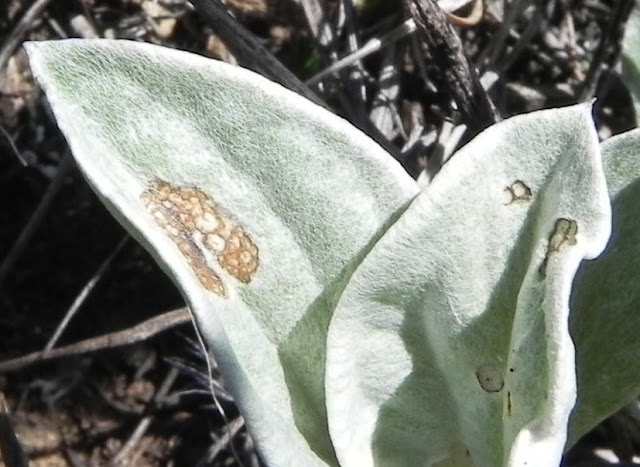 At the scraping site, the early instar also instinctively begins its classic self-defense; it creates a roof of silk above its eating site.  The frass remains inside the notoriously messy "nest." 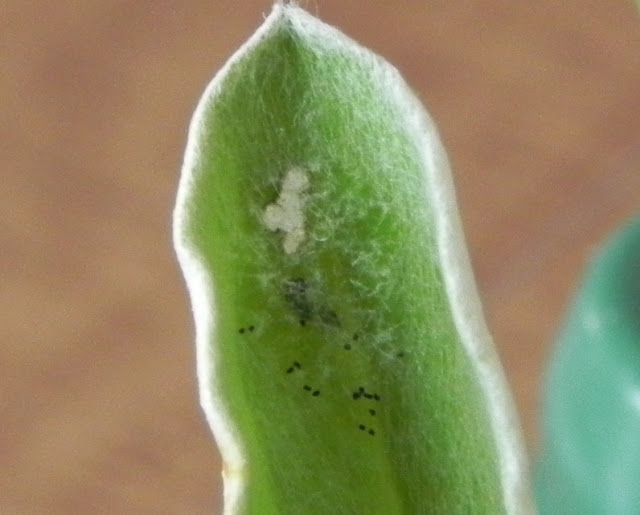 The caterpillar rarely comes out during the daytime.  The later instar in the photo below is beginning to display the rather striking spines that will be more evident as it grows.  When it reaches this size, it also becomes capable of actually pulling the edges of the pussytoes leaf together to make a more secure nest. 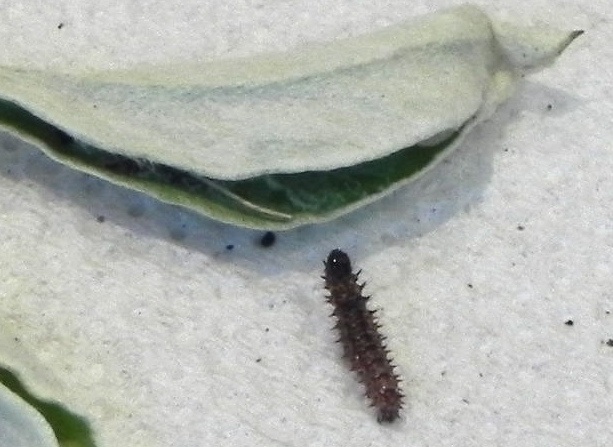 I believe this is facilitated in part by some natural curvature of the leaf, but the final product is really quite striking, and easily visible when you walk past a patch of pussytoes. 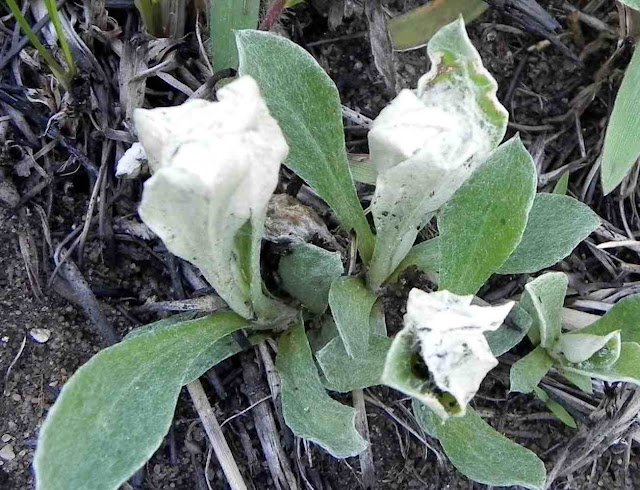 Within that nest the caterpillar continues to scrape the inner surface of the leaf for its nutritional needs.  This is a leaf I unfolded from an empty "nest": 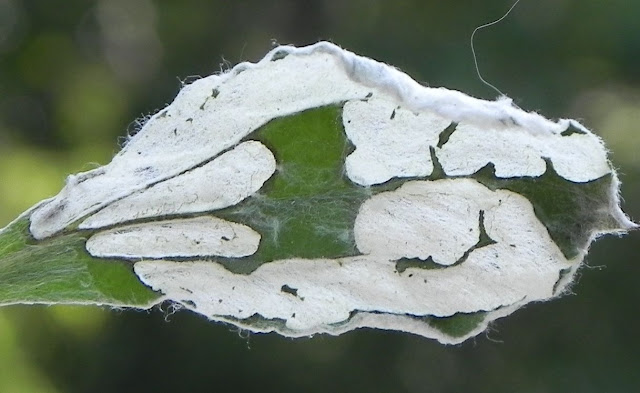 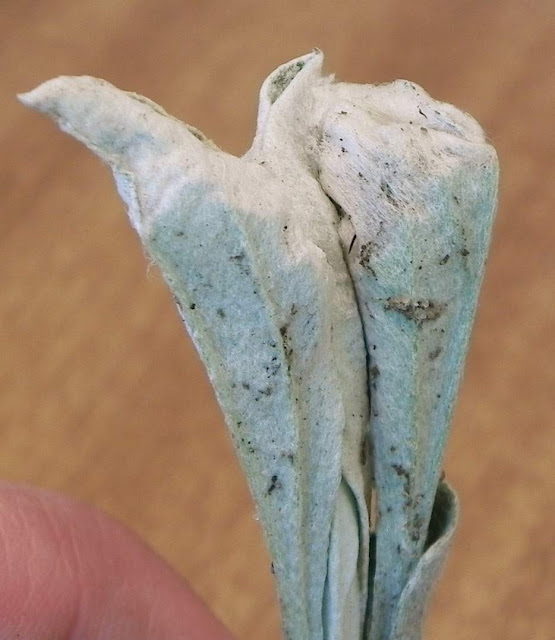 I find it interesting that when several leaves are stitched together, the larger gaps are filled not just with silk, but with some white patchy material that doesn't appear to be silk; I suspect it is some of the detritus scraped off the leaf surface.  It almost looks like a decorative lace. 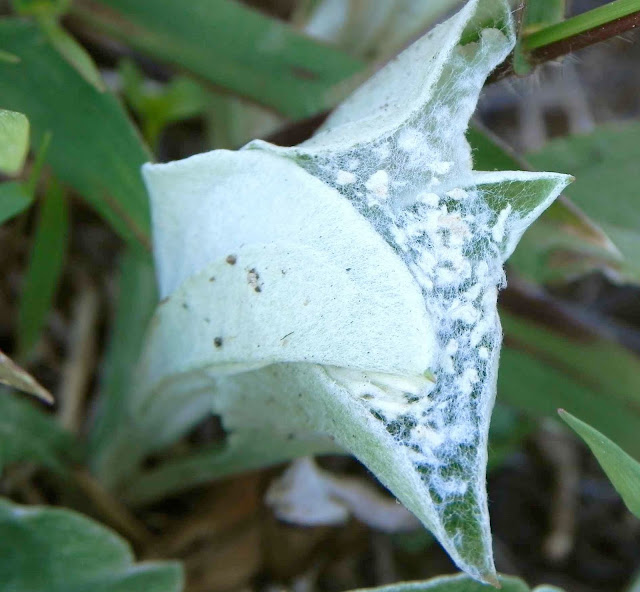 Addendum:  Later in the summer I encountered this fellow, whose "nest" was comprised of only a lace-like roof.  Considering his/her large size and the small size of the available leaves, I presume the cat wasn't physically able to approximate the sides of the leaves, and thus had to settle for this more open-air arrangement. 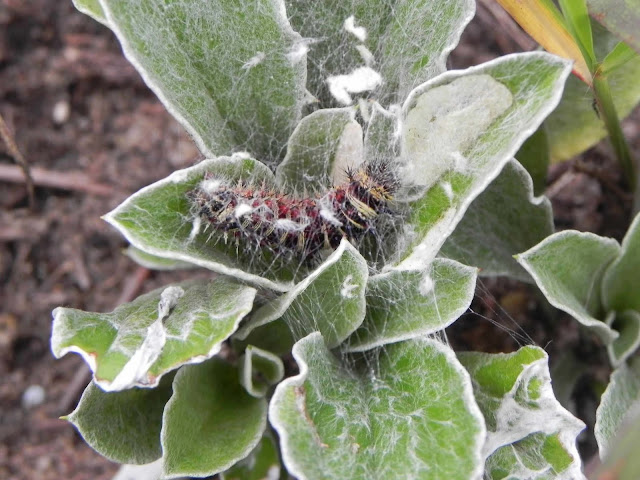 Like other photographers and butterfly enthusiasts, I've been reluctant to open these nests to get photos of the middle and late instars, because the cat invests so much energy in creating the nest, one doesn't want to disturb it.  But they do sometimes wander out... 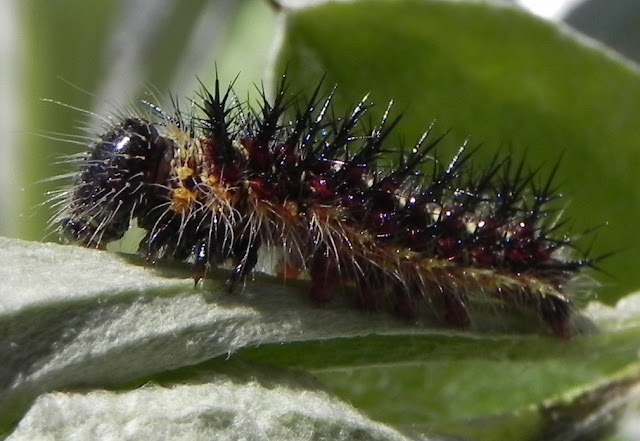 and in doing so they display their other defenses - an array of spines and hairs that are visually quite formidable. 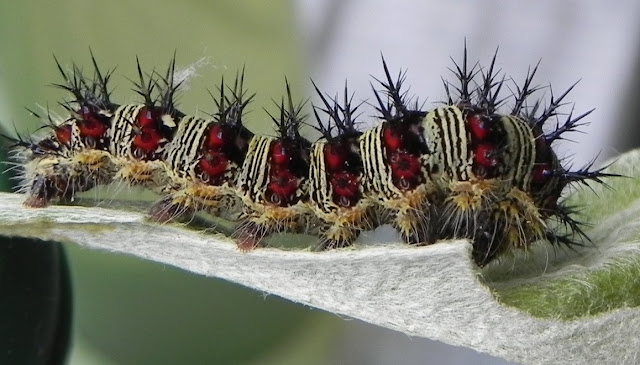 Whether they are toxic to touch or not, I do not know (haven't tried).  There is more information on the American Lady caterpillars in these three posts at the GardenWeb Butterfly Garden Forum.

I have only a few photos of the caterpillars because as a whole I saw them very seldom. I eventually became suspicious about the lack of apparent activity and opened one of the nests… 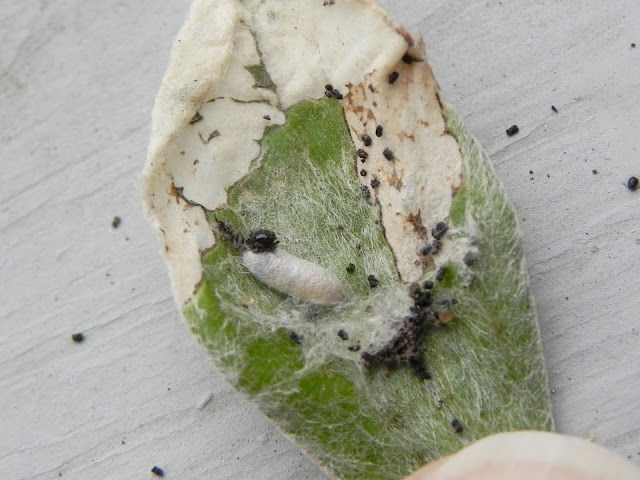 This cat has been parasitized; I don’t know whether this occurred before I collected him, or whether the fly/wasp/whatever penetrated our screen porch and the tulle covering the container. I should have saved this specimen to see what eventually hatched, but I discarded it, so if anyone reading this can give me insight re the identity of the parasite, I would be quite interested.

The scene was replicated in a couple other nests, and a couple more were just empty, with no sign of the cat. I finally decided that some “skins” I had seen earlier and had assumed were shed during molting were probably desiccated bodies of parasitized cats.

Eventually two cats successfully formed their chrysalises on the tulle; I used a bit of dental floss to tie them to a stick for more stability: 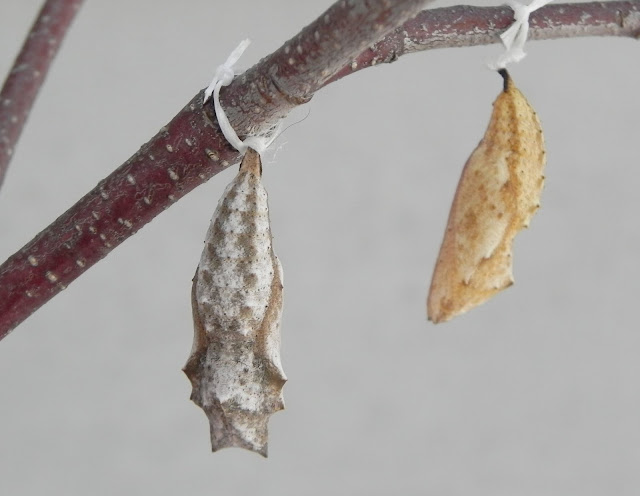 I was at first intrigued by the striking difference in color in the two chrysalises. I’ve seen variable color in BST chrysalises and thought this was natural variability – until I happened to turn the stick so that it was backlit… 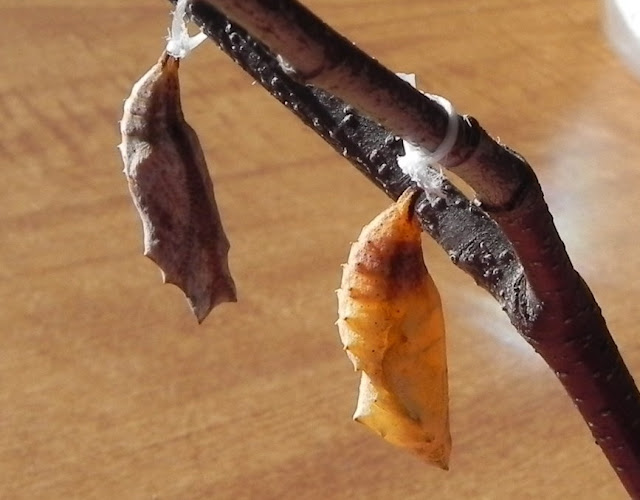 The pale chrysalis is obviously almost empty. That cat also had been parasitized, or at least had shriveled and died for some reason. That left me with just one chrysalis to complete this documentation of the cycle. I kept my fingers crossed.

The last chrysalis finally turned quite dark one evening. The next morning I moved it to my breakfast table and kept it by my side while I started the NYT Sunday crossword. I was planning to get some pix of the eclosion, but the process was of course silent and I was engrossed, so when I finished the puzzle and looked up, she already had her wings fully inflated - 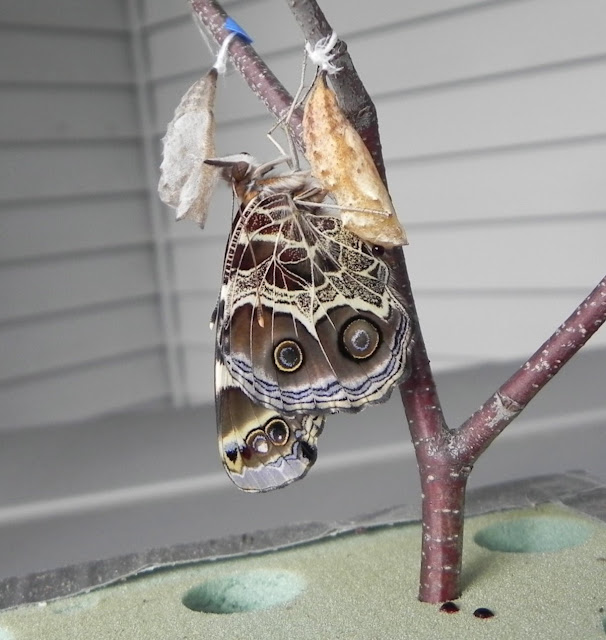 A closeup of her pattern beneath the wings shows the characteristic two eyespots and the delicate “cobweb” pattern in the proximal wing. The colors combine some beautiful shades of brown and sort of a russet and a subtle blue (all these photos will supersize with a click)... 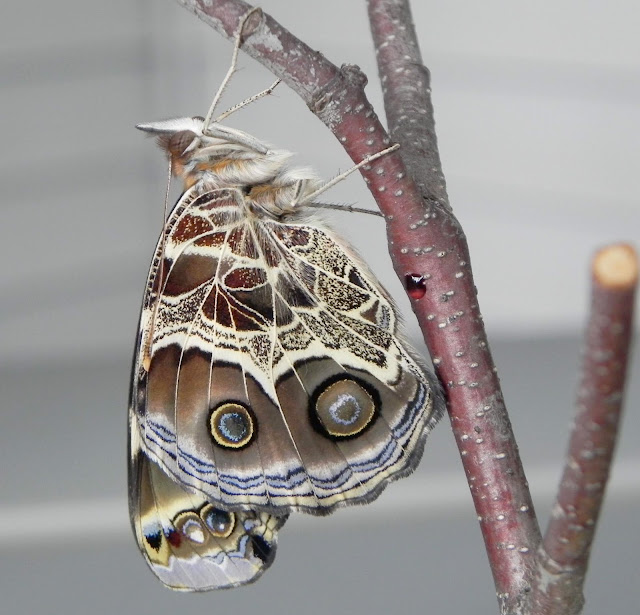 When she became restless I moved her to some rattan. Her resting pattern looked like this – 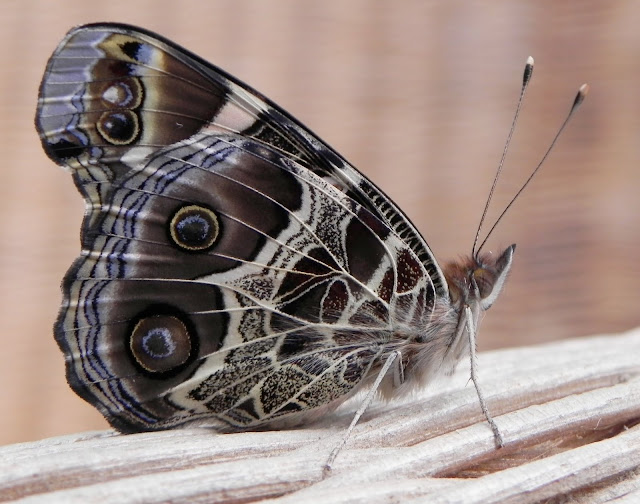 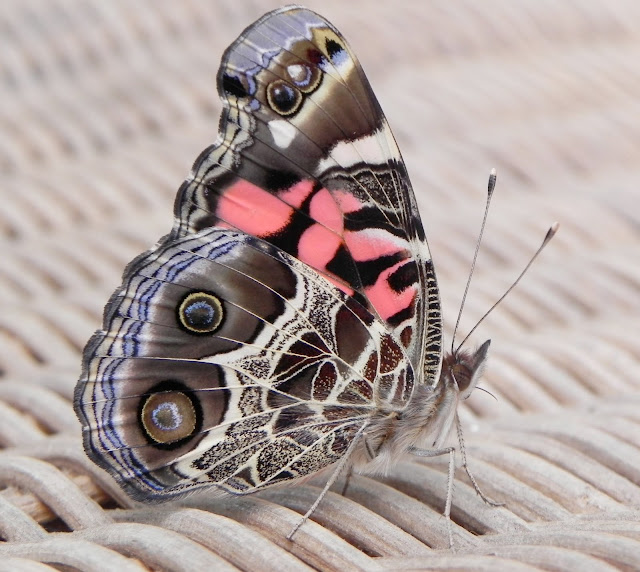 Maybe it was a coincidence that she did this when I got close to her, but it seemed as though she were using the rose spot for a sort of defensive purpose to “startle” a potential predator.  This was within a couple hours of eclosion, so she was still docile enough to climb onto my finger and display her upper wing pattern when I put her in direct sunlight – 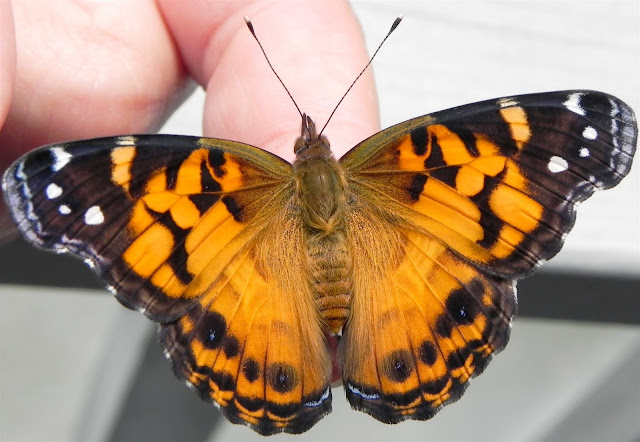 The American Lady is supposed to show a characteristic small white dot inside the large orange cell by the upper wing margin. This particular butterfly didn’t have such a spot. After another hour or so in the sun she was ready to go, so I took her outside on the deck and she flew off over the treetops.  BTW,  I’ve been calling this butterfly “she” because of her name, but to be honest I have no idea whether this is a male or a female; I’d appreciate any information on how to make that distinction.

These are common butterflies that range coast-to-coast and Canada-to-Mexico in the United States, and for that reason I suspect the delicate beauty of their wing patterns is not fully appreciated.  Try supersizing the photos with a click...