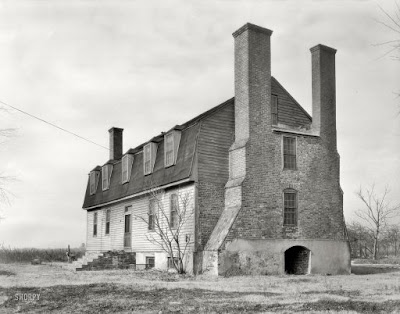 I was intrigued by the unusual architecture at the ends of this house (view the wallpaper image at the Shorpy discussion), especially the brickwork of the immense chimneys.  With a quick Google I found the following history of the building:


The one-time tavern, which witnessed a hustle and bustle of travelers ferrying to and from New Kent County, boasts more George Washington encounters than a dozen other houses could even dream of.

"This likely was a stop for Washington on his way to the House of Burgesses in Williamsburg," Fischer noted. "First the tavern and then the ferry."

In fact, Fischer said he has proof of 25 documented visits by Washington to the area, and there were likely more.

Fischer said Windsor Shades was probably built about 1745... Providing a tour of the house, Fischer noted the ship's ballast stones used in the basement's walls, the tavern room with one of the largest fireplaces in Virginia, and cases in an upstairs hallway containing hundreds of Indian and Colonial artifacts found on the property, from tribal ceremonial pipes to English ceramics...


The dwelling is a story and a half, five bay, gambrel roofed structure built of frame, covered with beaded weatherboards and set on a low, English-bond brick basement. The feature for which the house is renowned is the massive Flemish bond brick chimney stacks at either end. The east chimneys consist of double stacks with three sets of tiled weatherings on each and with a two-story pent between them.

- where there is also a photo of Windsor Shades as it looks now: 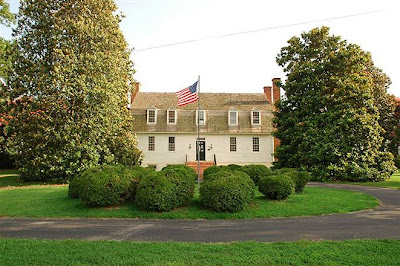