Is the brainstem depicted in a Sistine Chapel fresco?? 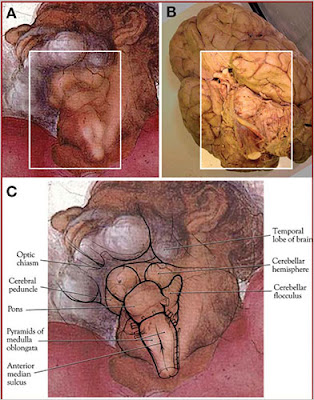 Michelangelo was a conscientious student of human anatomy and enthusiastically dissected corpses throughout his life, but few of his anatomical drawings survive. This one, a depiction of the human brain and brain stem, appears to be drawn on the neck of God, but not all art historians can see it there...

God, clothed in flowing red robes, is viewed from below and foreshortened, and seems to be rising into the sky. His arms are raised above his head, and he faces up and to his right, exposing his neck and the underside of a short beard. It is here that the study’s authors, the medical illustrator Ian Suk and Dr. Rafael J. Tamargo, a neurosurgeon, believe that Michelangelo concealed a drawing of the underside of the brain and the brain stem, with parts of the temporal lobe, the medulla, the pons and other structures clearly drawn...

To me it looks more like a depiction of a thyroid cartilage, larynx, and upper trachea - but I suppose this is in "the eye of the beholder."  Further discussion at the New York Times.  Original source at Neurosurgery 66: 851-861, 2010.