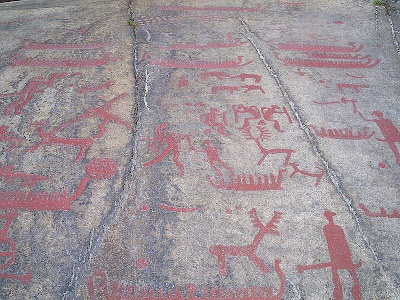 "In northern Bohuslän there are roughly 1,500 known rock carvings, and new ones are constantly being discovered. A large and unusually varied collection of them can be found in Tanum. Here archaeologists have found thirteen types of figures and motifs, such as cup marks, ships, sleighs, animals, humans, hands, feet, trees, and weapons. The pictures describe the social life of Bronze Age people, their spiritual experiences, beliefs, and rites.

The figures in rock carvings should mostly be regarded as isolated motifs, but in Tanum there are several large works with a unified composition. One example is the Fossum carving, where some 130 closely placed figures - which never overlap - give a distinct impression of a deliberate composition. The images were presumably carved by a single person during a short time. There are several hunting scenes and beautifully drawn deer.

Top photo credit.  Photo of the "happy hunter" at left: Bengt A Lundberg and Gabriel Hildebrand.  Via Uncertain Times.