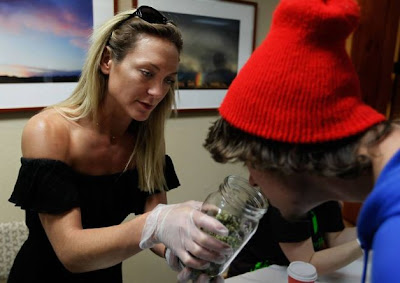 ASPEN, CO - APRIL 18: Beatriz Herrera-Rodden (L) shows off some of her marijuana samples at the Cannabis Crown 2010 expo in Aspen, Colorado. Herrera-Rodden runs Soverign Salud, a health and wellness clinic in nearby Carbondale that includes marijuana use in its bevy of relaxation therapies. Colorado, one of 14 states to allow use of medical marijuana, has experienced an explosion in marijuana dispensaries, trade shows and related businesses in the last year as marijuana use becomes more mainstream.

Who would have imagined, even just a decade ago, that something like this would be routine news in the mainstream media?

From a gallery of 40 photos at CTPost [Bridgeport, CT].  Photo by Chris Hondros/Getty Image.