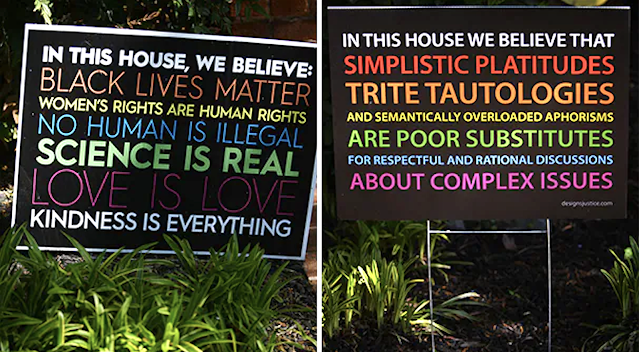 They started to wonder what that second sign, available on Etsy for $31.95, was supposed to say. Was it a direct rebuke of the idea that all were welcome in their community? Was it an attack on the messaging of the Democratic Party, which often uses such phrases as rallying cries? Or was it just trying to be funny?
Either way, many neighbors said, the dueling yard signs made public a sort of tension that is rarely articulated in an area proud of its understated brand of liberalism...
On the block of Oronoco Street where the yard signs appeared, some residents said they almost never discuss their views on housing or politics. They much prefer to learn the names of each other’s dogs and kids, exchanging pleasantries but respecting each other’s privacy.
That dynamic made it all the more unusual when another sign — an apparent response to the response — appeared in the front yard on Oronoco Street.
This one said: “In this house we believe that using snark and sarcasm and pedantic, overly complex language to respond to others’ somewhat meaningless virtue-signaling is just divisive and trollish behavior, but hey, signs are fun.”

Embedded image cropped and brightened from the original at the Washington Post.