Should you NOT point at a rainbow ? 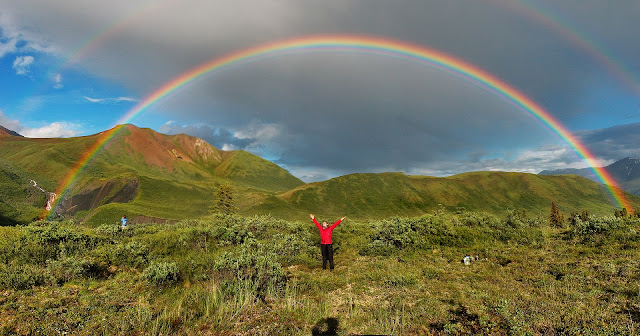 Many cultures around the world consider it improper - or even dangerous - to point at a rainbow.  Excerpts from an article in Atlas Obscura:

He would soon amass evidence for the rainbow taboo—in some form or another—in 124 cultures. The prohibition turned up in North America, among the Atsugewi of northern California and the Lakota of the northern plains; in remote parts of Australia and isolated islands in Melanesia; among the Nyabwa of Ivory Coast and the Kaiwá of Brazil. At one time it was present in Europe, too: one of the Grimm brothers noted it in his book on German mythology. The belief was not found in every culture, according to Blust’s search, but it was present globally, across all inhabited regions.
There was also more to the taboo than the vague idea that pointing to rainbows is bad. Blust found that it often came bundled with specific ideas about what would happen if you violated the taboo, ideas that varied from culture to culture. Most commonly, your finger would suffer the consequences: it might become bent or paralyzed, fall off, wither, rot, or swell, or develop warts, ulcers, or maggots. Less commonly—such as in parts of New Guinea and Australia—the ill effects would befall your mother. In most cases, it was specifically pointing with the index finger that was prohibited. It was fine to draw attention to a rainbow using your head, lips, nose, or tongue, or by forming your hand in a less “pointy” shape, such as a fist. A final recurring idea was that, should you accidentally point to a rainbow, there were remedies. You could wet the offending digit; or put it into a bodily cavity like your mouth, anus, or belly button; or, according to the Javanese version of the taboo, plunge it into a pile of buffalo dung.

Continue reading at the link.  Photo credit Eric Rolph at English Wikipedia.
Addendum on the etymology of the word iris: