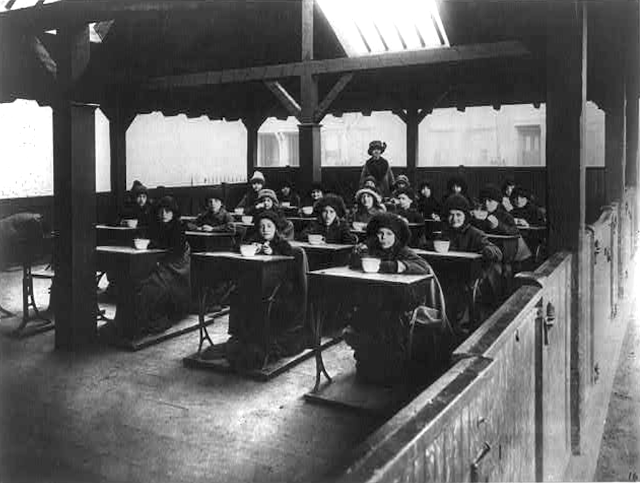 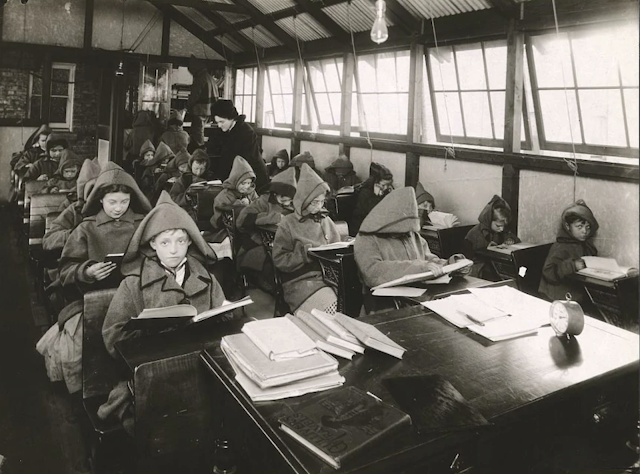 Our grandparents were willing to make sacrifices and endure inconveniences when they were told by medical authorities what was needed to protect the public health.  These photos are from the turn of the last century, when the concern was to prevent transmission of pulmonary tuberculosis.


In the early 1900s, it was estimated that as many as 30 percent of school-age children in Providence carried tuberculosis, a bacterial infection that often attacked the lungs. Although many of the infected children showed no outward symptoms, the infection could lie dormant for years and ultimately contribute to death in adulthood. To combat this, medical experts urged the importance of plenty of sunshine and fresh air.

The Providence open-air experiment was viewed as a success by parents and educators.

“After two years the school committee concluded that the experiment had more than met the expectations of its proponents,” wrote historian Richard Meckel in a 1995 article in Rhode Island History. “Virtually all the children attending the school had gained weight and improved in general health, and even a few had been able to return to normal classrooms.”..

“In the light of the amount of tuberculosis found at autopsy in children dying of other diseases and from accident, we must recognize the fact that many school children are carrying about hidden foci of this disease, and is it not probable that those are who are suffering with anemia, debility, etc., are likely to be the ones?”..

In 1913, Providence finally opened a second open-air school. That number reached 11 in 1926, and these special facilities would serve the city for another 31 years. By that time, the concept of an open-air classroom had spread to more than 150 American cities, aiding both the minds and bodies of thousands of students.

But advancements in antibiotics in the 1940s allowed doctors to treat tuberculosis with drugs instead of fresh air. As children’s health improved, the need for open-air classrooms in Providence became less urgent. Spanning five decades, the city’s grand experiment with open-air learning came to an end in 1957, when the program’s few remaining classrooms were closed.

Relevant:  Bring Back the Open Air School (with a hat tip to reader escapefromWisconsin)