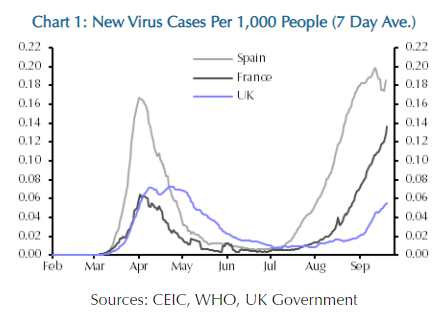 The question is much subtler than it was six months ago, when it was probably correct for a blindsided world to respond to a new and fast-spreading disease by shutting down. Now, there is greater knowledge, and much more complexity. So it is perhaps a little unnerving that the key test case on the “second wave” will be decided on by the U.K.’s prime minister, Boris Johnson.

To simplify a sprawling debate, the case for a lockdown is contained in these figures, shown here in a chart from Capital Economics. New Covid cases per capita are higher than they were at the worst of the spring in both Spain and France while they are rising menacingly in the U.K.

This is happening even though the U.K. ended up having one of the longest and most complete lockdowns the first time around. But are cases the best measure of the problem? In spring, cases were undercounted as officials struggled to organize testing. Now, more are being caught, despite serious problems with the U.K. testing system. Meanwhile deaths have barely risen yet, and remain far lower than they were in spring.

Hospitalizations show a just-discernible rise in the last few weeks, according to figures from Britain’s National Health Service. The number of people so seriously ill that they need to go to hospital is still tiny compared to the spring, and there is no imminent danger of the system overflowing.

While deaths are obviously the most important measure, followed a long way behind by hospitalizations, the situation is complicated by the growing evidence that some people can suffer long-term debilitating consequences. There is still very little data on how widespread the problem is, and how long the effects can persist, but there are enough anecdotes to suggest that people under the age of 50 shouldn’t be too cavalier about the risks of catching the virus — and that governments should go to some lengths to protect them.

Johnson has to decide what to do. A second full lockdown looks hard to justify. Allowing the disease to continue expanding at its current rate looks similarly hard to justify.

Will some more nuanced lockdown keep the disease sufficiently bottled up? Will Covid continue to grow less deadly over time? Or will greater understanding of longer-term effects force yet another change in direction? The answers to these imponderable questions matter to all of us. They will also determine the direction of asset markets.

More charts and discussion at the link.