Daddy crocodile with his babies 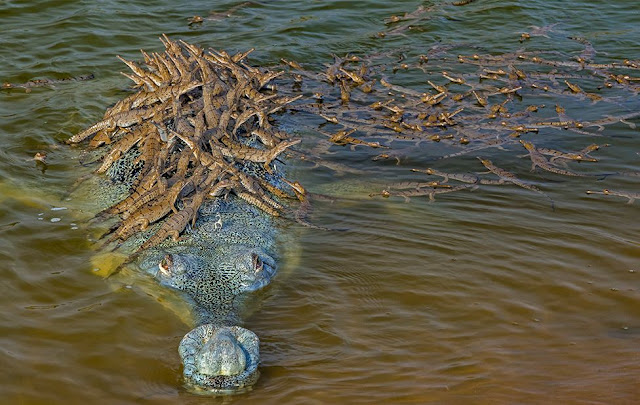 The image was captured by expert photographer Dhritiman Mukherjee. His shot, snapped in India's National Chambal Sanctuary, is highly commended in this year's Wildlife Photographer of the Year (WPY) competition.
Every one of these youngsters needs to survive into adulthood and to breed.
The freshwater gharial (Gavialis gangeticus) is critically endangered. Where once it could have numbered more than 20,000 animals across South Asia, the species is now down to perhaps less than 1,000 mature individuals - and three-quarters of these are concentrated in the Uttar Pradesh sanctuary.

Since it's a daddy croc, we can insert a lame "dad joke":  How do you distinguish a crocodile from an alligator?  "One will see you in a while, the other will see you later."  Thank you.  I'll show myself out...