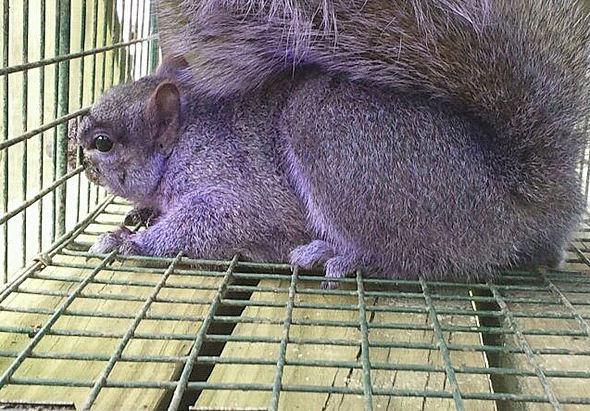 First, about the squirrel in the photo.

It was trapped, photographed, and released in Jersey Shore, Pennsylvania.   The photo shows it inside what looks like a Hav-A-Heart trap.


The Emerts currently do not know why the squirrel is purple. "We have no idea whatsoever. It's really purple. People think we dyed it, but honestly, we just found it and it was purple."

Some initial suggestions were that the squirrel had gotten into purple ink or paint.  Here is a more ominous suggestion:


That color looks very much like Tyrian purple. It is a natural organobromide compound seen in molluscs and rarely found in land animals. The squirrel has too much bromide in its system possibly from all the bromide laced frack water its been drinking. I would raise the alarm. This could mean bladder cancer for humans down the road.

Some of the photos at the link suggest that the squirrel had some non-purple hairs, which I think would argue against a metabolic cause.

Further details and photos at Accuweather (where someone has suggested the squirrel robbed a bank and triggered the dye pack). 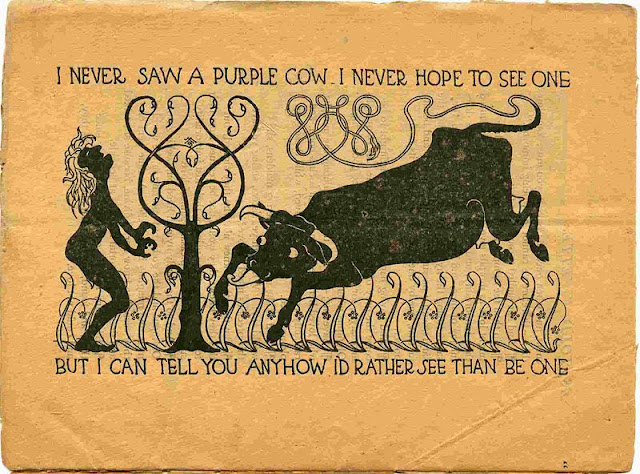 Now, about the title of the post.  The squirrel story reminded me of a poem my father recited to me about 60 years ago (almost certainly the only poem he ever learned):


I never saw a purple cow.
I never hope to see one.
But I can tell you anyhow
I'd rather see than be one.

This nonsense rhyme was written in 1895 by Gelett Burgess, who invented the word "blurb." 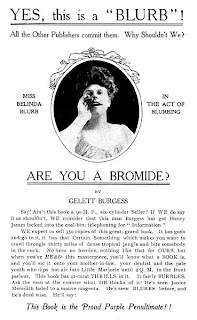 The word blurb originated in 1907. American humorist Gelett Burgess's short 1906 book Are You a Bromide? was presented in a limited edition to an annual trade association dinner. The custom at such events was to have a dust jacket promoting the work and with, as Burgess' publisher B. W. Huebsch described it,


"the picture of a damsel — languishing, heroic, or coquettish — anyhow, a damsel on the jacket of every novel"

In this case the jacket proclaimed "YES, this is a 'BLURB'!" and the picture was of a (fictitious) young woman "Miss Belinda Blurb" shown calling out, described as "in the act of blurbing." The name and term stuck for any publisher's contents on a book's back cover, even after the picture was dropped and only the complimentary text remained.

The poem was very popular in its day, and became something of a meme, parodied by other writers of the day -

And later by Ogden Nash -


I've never seen an abominable snowman,
I'm hoping not to see one,
I'm also hoping, if I do,
That it will be a wee one.


I never was a vitamin;
I never hope to be one;
but I can tell you anyhow;
I'd rather C than B1!

Burgess became so exasperated that the nonsense rhyme overshadowed his other work that he eventually wrote this sequel:

That's enough.  And as I'm proofreading this post, I have to note that it is totally a coincidence that the title of the book and the postulated toxin in the squirrel both involve "bromide."
Reposted from 2012 to add this stunning photo of a purple toad [Atelopus barbotini], endemic to the uplands of French Guiana: 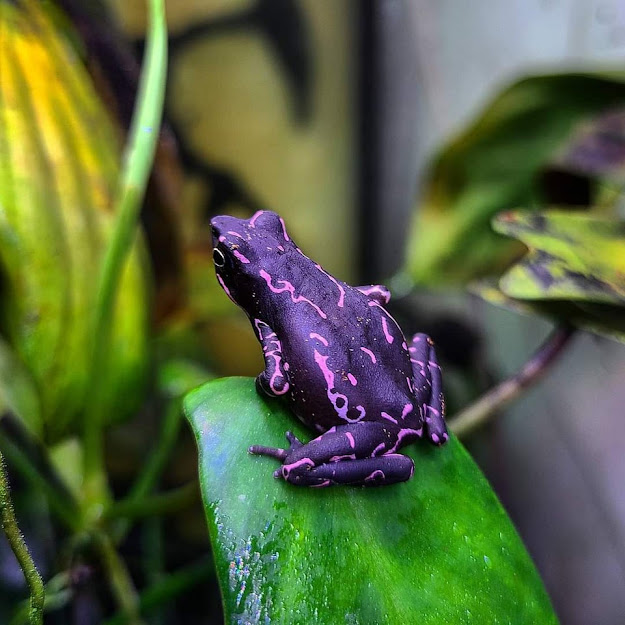