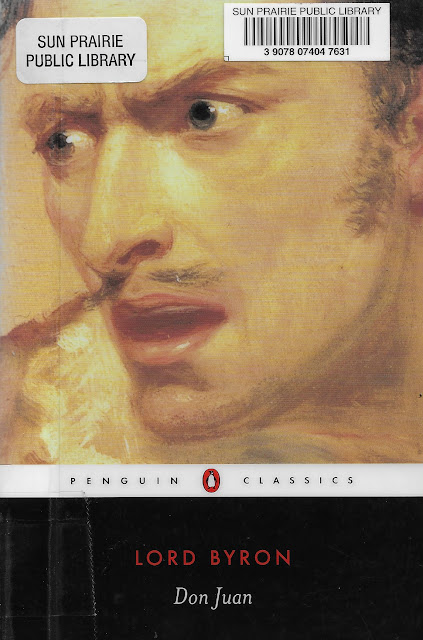 And walking out upon the beach below
The cliff, towards sunset, on that day she found,
Insensible, not dead, but nearly so,
Don Juan, almost famished and half drowned.
But being naked, she was shocked, you know,
Yet deemed herself in common pity bound,
As far as in her lay, 'to take him in,
A stranger' dying, with so white a skin.  (II, 129)

He ate, and he was well supplied, and she,
Who watched him like a mother, would have fed
Him past all bounds, because she smiled to see
Such appetite in one she had deemed dead.
But Zoe, being older than Haidee,
Knew (by tradition, for she ne'er had read)
That famished people must be slowly nurst
And fed by spoonfuls, else they always burst. (II, 158)

[interesting knowledge of a refeeding syndrome]

Let us have wine and woman, mirth and laughter,
Sermons and soda water the day after. (II, 178)

A long, long kiss, a kiss of youth and love
And beauty, all concentrating like rays
Into one focus, kindled from above;
Such kisses as belong to early days,
Where heart and soul and sense in concert move,
And the blood's lava, and the pulse a blaze,
Each kiss a heart-quake, for a kiss's strength,
I think, it must be reckoned by its length. (II, 186)

Wives in their husbands' absences grow subtler,
And daughters sometimes run off with the butler. (III, 22)

'All this is very fine and may be true,'
Said Juan, 'but I really don't see how
It betters present times with me or you.'
'No?' quoth the other, 'yet you will allow
By setting things in their right point of view,
Knowledge at least is gained; for instance, now
We know what slavery is, and our disasters
May teach us better to behave when masters.'  (V, 23)

But let it go.  It will one day be found
With other relics of a former world,
When this world shall be former, underground,
Thrown topsy-turvy, twisted, crisped and curled,
Baked fried, or burnt, turned inside out, or drowned,
Like all the worlds before, which have been hurled
First out of and then back again to chaos,
The superstratum which will overlay us.

So Cuvier says.  And then shall come again
Unto the new creation, rising out
From our old crash, some mystic, ancient strain
Of things destroyed and left in airy doubt,
Like to the notions we now entertain
Of Titans, giants, fellows of about
Some hundred feet in height, not to say miles,
And mammoths and your winged crocodiles.

Think if then George the Fourth should be dug up!
How the new worldlings of the then new East
Will wonder where such animals could sup.
(For they themselves will be but of the least.
Even worlds miscarry when too oft they pup,
And every new creation hath decreased
In size, from overworking the material.
Men are but maggots of some huge earth's burial.)  (IX, 37-39)

The courtiers stared, the ladies whispered, and
The Empress smiled.  The reigning favourite frowned.
I quite forget which of them was in hand
Just then, as they are rather numerous found,
Who took, by turns that difficult command
Since first Her Majesty was singly crowned.
But they were mostly nervous six-foot fellows,
All fit to make a Patagonian jealous.  (IX, 46)

'Where is the world?' cries Young at eighty. 'Where
The world in which a man was born?' Alas!
Where is the world of eight years past?  'Twas there -
I look for it - 'tis gone, a globe of glass,
Cracked, shivered, vanished, scarcely gazed on, ere
A silent change dissolves the glittering mass.
Statesmen, chiefs, orators, queens, patriots, kings,
And dandies, all are gone on the wind's wings.  (XI, 76)
[continues for four more verses]

Oh gold!  Why call we misers miserable?
Theirs is the pleasure that can never pall.  (XII, 3)
[good question.  Apparently it is an assumed association]

I'll have another figure in a trice,
What say you to a bottle of champagne,
Frozen into a very vinous ice,
Which leaves few drops of that immortal rain.
Yet in the very centre, past all price,
About a liquid glassful will remain,
And this is stronger than the strongest grape
Could e'er express in its expanded shape. (XIII, 37)
[knowledge of ice wine]

Don Juan was Byron's magnum opus, a work often properly described not as a poem but rather as a "verse novel" because of its length.  I can't really offer a blanket recommendation; I reread it in order to revisit an undergraduate encounter with the text when I was a senior in college.  There are several thousand verses, and even at that it was unfinished at the time of Byron's untimely death.  The story of Don Juan provides a vehicle for Byron to comment on everything from politics to contemporary literature to ethics and mores.  The content thus becomes a bit dated and trivial, but the work as a whole does show his mastery of verse.