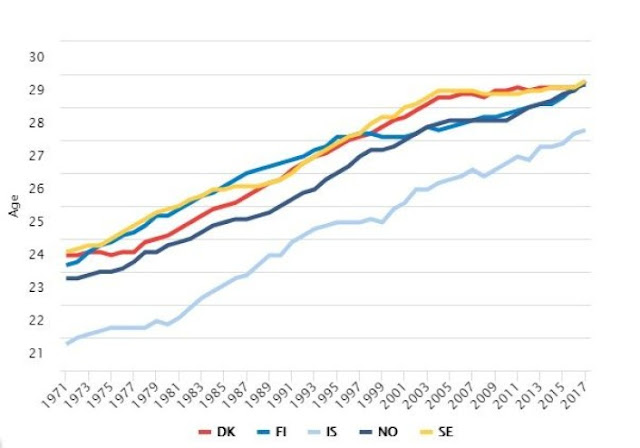 The age that women have their first child has gone up in Denmark (DK), Finland (FI), Iceland (IS), Norway (NO) and Sweden (SE). (Nordic Council of Ministers screenshot)


From an article at ScienceNorway:

The Nordic countries have previously had high fertility rates. This has been partly explained by the fact that the countries have favourable policies for parental leave and childcare.

Now these policies don’t seem to be having as much effect as one would expect, Karlsdóttir says. “We’re becoming more and more like the rest of the world.” Fertility rates have gone down in almost the entire Nordic region


Finland has seen the largest drop in fertility rates. The country’s average fertility rate is now 1.4 births per woman, compared to 1.9 in 2010. Norway is just behind at 1.56 children, compared with 1.96 in 2010. Finland’s and Norway’s fertility rates are now lower than the EU average, which is at 1.59.

Thanks to Sweden and Denmark, which still have relatively high fertility rates, the Nordic region as a whole is slightly above the EU average. Sweden’s fertility rate is 1.76 children born per woman and Denmark’s is 1.72.

The researchers' main explanation for this development is that women are having their first child later in life.  Today, the average age of first-time mothers in the Nordic countries is 30 years old compared to age 21 in 1971...

Norwegian women need to give birth to 2.1 children, knows as 'the replacement rate', each to maintain the population.

Discussion re population mobility and immigration effects at the link.