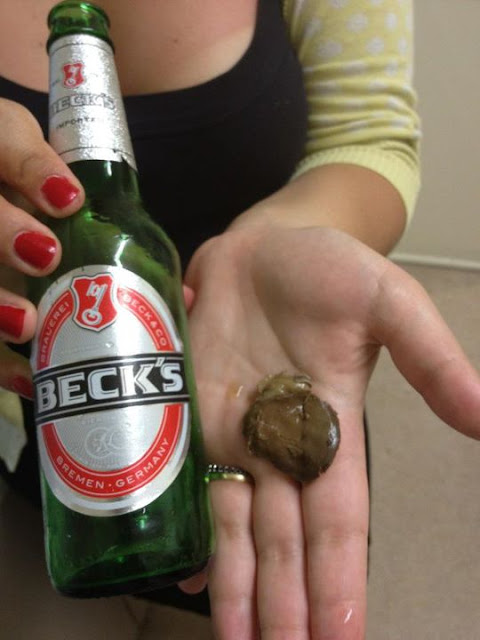 
At an engagement party last weekend, my husband enjoyed a Beck's. He decided he would like to enjoy another and so opened this bottle, took a sip and cringed. His beer tasted awful and he wiped off what looked like dirt from the bottle cap. He held the beer to the light and the liquid was murky through the green glass there was something floating in it. We go in to the kitchen, pour the beer down the sink and something slipped out. I turned it over and it kind of looked like a mushroom and smelled a whole lot like shit. This image is the bottle and the offending object.

That's a Beer Oyster. It was caused by a pasteurization failure, the beer was not heated to the right temperature. Leftover yeast/bacteria were able to use the leftover air in the top of the bottle to survive and make a slimy, stinky mess. Source: My mother and brother work for major beer companies.

Close. At 2-3 minutes the pasteurization of 140F isn't going kill the yeast. Also through fermentation the environment is already inhospitable to the yeast. It has fermented out and can ferment no more. If it isn't fermenting it isn't reproducing. It isn't building yeast cake. Even so this would appear as a light film on the bottom as in a bottle conditioned beer.  What you are seeing is most likely a plate filter failure. It's going to be a mix of proteins, yeast and hop matter. Filter probably let loose a clogged bit at the end. It's unlikely to be an infection if the others were unaffected. Source: Homebrewer for 15 years, have brewed at a micro brewery.

Reposted from 2012 to add information about the essential role of beer in fasting in the 17th century:


Catholic monks once brewed beer specifically for a liquid-only Lenten fast. Back in the 1600s, Paulaner monks moved from Southern Italy to the Cloister Neudeck ob der Au in Bavaria. “Being a strict order, they were not allowed to consume solid food during Lent,” the braumeister and beer sommelier of Paulaner Brewery Martin Zuber explained in a video on the company’s website.

They needed something other than water to sustain them, so the monks turned to a common staple of the time of their region – beer. They concocted an “unusually strong” brew, full of carbohydrates and nutrients, because “liquid bread wouldn’t break the fast,” Zuber noted.

This was an early doppelbock-style beer, which the monks eventually sold in the community and which was an original product of Paulaner brewery, founded in 1634. They gave it the name “Salvator,” named after “Sankt Vater,” which “roughly translates as ‘Holy Father beer,’” Zuber said.

Paulaner currently serves 70 countries and is one of the chief breweries featured at Munich’s Octoberfest. Although its doppelbock is enjoyed around the world today, it had a distinctly penitential origin with the monks.

Could a beer-only fast really be accomplished? One journalist had read of the monks’ story and, in 2011, attempted to re-create their fast...

Details about that beer fast at Catholic News Agency, where the article also offers this modern-day more lenient redefinition of Lenten fasting:


Fasting is interpreted to mean eating one full meal and two smaller meals that, taken together, do not equal that one full meal. There may be no eating in between meals, and there is no specific mention of liquids in the guidelines.