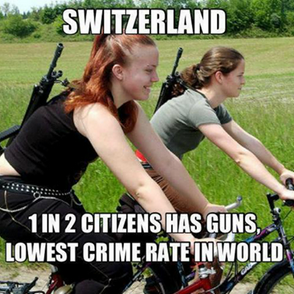 "Switzerland’s high rate of gun ownership is tied to the fact that it does not have a standing army so virtually every male citizen is conscripted into the militia where they receive comprehensive weapons training. Since they are a militia, they keep their government issued weapons (without ammunition) at home. Therefore, many of the guns in Swiss homes were issued to them by the government and most Swiss gun owners are highly trained in gun safety...

And with a law worthy of Orwell’s worst nightmare, every gun in Switzerland is registered by the
government...

Unless those two laughing women on the bicycles are transporting those weapons to a gun show or are members of the militia reporting for duty (in which cases the guns must not be loaded) or they are security personnel licensed to guard Roger Federer, they are probably breaking the law. “Open carry,” as we understand it in the United States, is only allowed in those very limited circumstances...

You can see that the Swiss militia inculcates the idea of gun ownership as a responsibility to protect the nation while to the American gun proliferation advocates, the reason for the 2nd Amendment is to protect the citizens from the government."

Addendum:
A tip of the blogging hat to reader Dominique, who forwarded me an article reporting that Switzerland has the highest rate of gun-related suicide in Europe:


“In Switzerland, firearms are like pesticides in developing countries. They are accessible,” Ajdacic-Gross explained. “Many suicides are impulsive. In other words, the decision is taken very quickly.”

At such moments, availability – or a lack of it – is crucial. “If somebody has to make a lot of effort to find something that will kill them, that’s a strong preventative factor.”