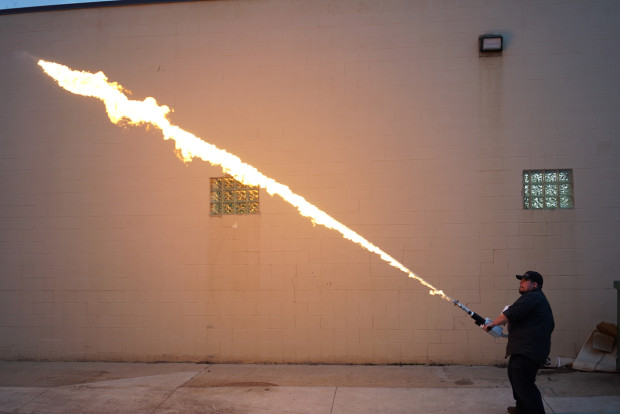 As reported by Ars Technica:


Business is skyrocketing higher than ever due to the discussion on prohibition," Chris Byars, the CEO of the Ion Productions Team based in Troy, Michigan, told Ars by e-mail. "I’m a huge supporter of personal freedom and personal responsibility. Own whatever you like, unless you use it in a manner that is harmful to another or other’s property. We’ve received a large amount of support from police, fire, our customers, and interested parties regarding keeping them legal."

Byars added that the company has sold 350 units at $900 each, including shipping, in recent weeks. That's in addition to the $150,000 the company raised on IndieGoGo.

The Ion product, known as the XM42, can shoot fire over 25 feet and has more than 35 seconds of burn time per tank of fuel. With a full tank of fuel, it weighs just 10 pounds...

Shockingly, there are no current federal regulations on the possession, manufacture, sale, or use of flamethrowers.

"These devices are not regulated as they do not qualify as firearms under the National Firearms Act," Corey Ray, a spokesman with the Bureau of Alcohol, Tobacco, and Firearms, told Ars by e-mail.

At the state level, California requires a permit while Maryland outright bans them—Ars is not aware of any other state-level regulation. The Inhumane Weapons Convention, which the United States signed in 1981, forbids "incendiary weapons," including flamethrowers. However, this document is only an agreement between nation-states and their militaries, and it did not foresee individual possession...

"If our own military doesn't use it and it's been banned by the Geneva Convention then why would someone think this should be sold to the general public?" he added. "I think it's too risky to gamble with people's lives. I can't think of something more horrific than to burn somebody alive, and that's what this would do."

I'll refrain from any personal commentary; I'll just file it in the appropriate blog category.