Ozymandias and the trashing of Palmyra 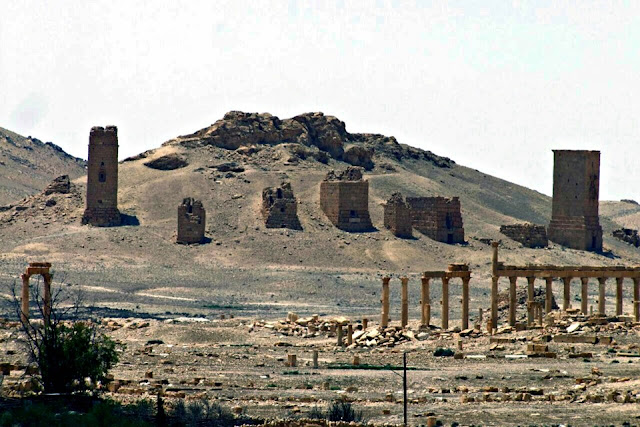 Shelley's classic poem has occasionally been cited in news reports about ISIS' destruction of archaeological sites in Syria, implying that the ravages of time inevitably bring about the downfall and destruction of even the mightiest kingdoms and their symbols.

First, some background on the poem -


In antiquity, Ozymandias was a Greek name for the Egyptian pharaoh Ramesses II. Shelley began writing his poem in 1817, soon after the announcement of the British Museum's acquisition of a large fragment of a statue of Ramesses II from the thirteenth century BC, and some scholars believe that Shelley was inspired by this... Shelley wrote the poem in friendly competition with his friend and fellow poet Horace Smith, who also wrote a sonnet on the same topic with the very same title... Both poems explore the fate of history and the ravages of time—that all prominent figures and the empires they build are impermanent and their legacies fated to decay and oblivion.


I met a traveller from an antique land
Who said: "Two vast and trunkless legs of stone
Stand in the desert. Near them, on the sand,
Half sunk, a shattered visage lies, whose frown,
And wrinkled lip, and sneer of cold command,
Tell that its sculptor well those passions read
Which yet survive, stamped on these lifeless things,
The hand that mocked them and the heart that fed:
And on the pedestal these words appear:
'My name is Ozymandias, king of kings:
Look on my works, ye Mighty, and despair!'
Nothing beside remains. Round the decay
Of that colossal wreck, boundless and bare
The lone and level sands stretch far away.

Now, some salient commentary from an op-ed piece in The Atlantic -


If the ruined ruins of Palmyra could speak, they would marvel at our shock. After all, they have been sacked before. In their mute and shattered eloquence, they spoke for centuries not only about the cultures that built them but also about the cultures that destroyed them—about the fragility of civilization itself, even when it is incarnated in stone. No designation of sanctity, by God or by UNESCO, suffices to protect the past. The past is helpless...

"...Wherever I cast my glance, the objects surrounding me announce death and compel my resignation to what awaits me. What is my ephemeral existence in comparison with that of a rock being worn down, of a valley being formed, of a forest that’s dying, of these deteriorating masses suspended above my head? I see the marble of tombs crumble into powder and I don’t want to die!”...

Yet as the world contemplates the destruction of Palmyra—I mean its destruction in our day, on our watch—we must resist the customary romanticism. It induces an aesthetic passivity, which would go too nicely with the West’s political passivity... 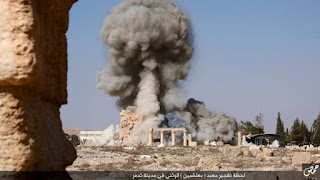 There was nothing metaphysical or inevitable about the recent detonation of the Temple of Baalshamin and the Temple of Bel. ISIS was not acting as the agent of time. It was acting as the agent of its savage ambitions. What was done in Palmyra was a crime. The crime was committed in particular circumstances and for particular ideas—in geopolitical and ideological contexts...

Palmyra, in its heyday during the first three centuries of the Common Era, was one of the ancient capitals of what scholars call syncretism and the rest of us call pluralism. It was a Middle Eastern destination on the Silk Road, a caravan city raised on an oasis in the Tadmurean desert that was situated on an important trade route. Its architectural and epigraphic remains portray a motley city formed in its character by Rome to the west and Persia to the east; Hellenistic and Central Asian influences mingled with Amorite, Aramaean, and Arab elements. In Palmyra one could find Greek sculpture and Chinese silk...