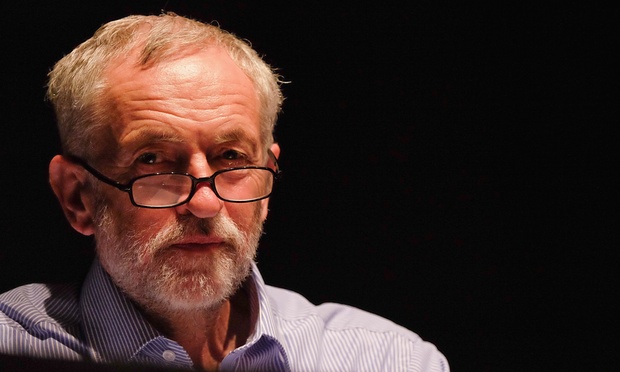 Few American voters may yet have heard of Jeremy Corbyn, the previously obscure British parliamentarian who is poised to become leader of the official Labour opposition to David Cameron’s government. But if they have been following the US presidential race, they may already understand the general idea.

Slap a beard on leftwing Democratic candidate Bernie Sanders and make him as casual as a Romantic poet and you have a good approximation of the elderly radical across the Atlantic who is shaking the fragile pillars of the British establishment and could (at least in theory) become Queen Elizabeth’s next prime minister of the not-so United Kingdom...

To the amazement of pundits and politicians alike, Corbyn’s campaign took off in July much as Sanders’s own has done for the Democratic nomination. Despite being unfashionable democratic socialists, both men tapped a deep well of resentment against the mainstream political elite by people who feel patronised, neglected and left behind.

The article from The Guardian excerpted above goes on to mention populist uprisings in France and Greece. There is also an analysis of Corbyn's rise at Salon.

A longtime member of Parliament from North London who appears not to own a tie, Corbyn has spent his entire political career as a rebellious Labour “backbencher” – that is, he has never been part of the party leadership, nor held a government post when Labour had a majority...

Like Sanders, Corbyn has long advocated for a rejection of austerity politics and a return to seemingly outmoded policies of ambitious social spending, government activism and higher taxes on big business and the rich. He has proposed universal childcare and free higher education for all, wants to renationalize Britain’s railroads and utilities, and believes the country should withdraw from NATO, scrap its nuclear missiles and invest most of its military budget in job programs...

If no one finds Corbyn’s politics so amusing anymore, there is an element of comedy in the Armageddon that Labour’s centrist establishment may have called down upon itself. In the interest of greater transparency and democracy, the party opened this year’s leadership election to anyone who registered online as a party supporter and pay a minimal fee – and the apparent result is a whole lot more democracy than they wanted. Ballots started going out this weekend to 610,000 or so Labour members and supporters – more than half of whom signed up during the current campaign and are highly likely to be Corbyn voters. Labour’s leadership underestimated the public appetite for candidates and ideas that lie outside the safe zone of neoliberal consensus politics, and is now likely to reap the whirlwind. It’s a lesson that will not be lost on political leadership castes around the world.

And  here's a related op-ed piece in The Spectator.

I would welcome informed opinion from some of the many TYWKIWDBI readers in the UK and EU. 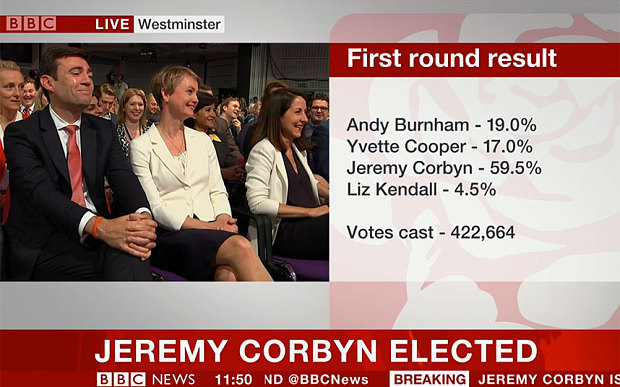 More details at The Telegraph, the Guardian, the Independent, the BBC, The Observer, The Times, and other British and European publications.  It might even be mentioned briefly in some American ones.

Addendum:  The Guardian has a succinct summary of Corbyn's beliefs and policy proposals:

Corbyn is opposed to austerity and plans to bring down the deficit by growing the economy and taxing the wealthy instead.

He intends to introduce a “people’s quantitative easing”, which would allow the Bank of England to print money to invest in large-scale housing, energy, transport and digital projects, partly through a national investment bank.

Corbyn says he will fund this by reducing the “tax gap” and ending corporate tax reliefs.

Corbyn says there is £20bn in tax debt uncollected by HMRC every year and another £20bn in tax avoidance and a further £80bn in tax evasion that needs to be addressed.

Corbyn has proposed a National Education Service, which he says would be “every bit as vital and as free at the point of use as our NHS”. The service would begin with universal childcare, give more power to local authorities, rethink the role of free schools and academies, introduce a minimum wage for apprentices and put more money into adult learning...

Continued at length at the link.