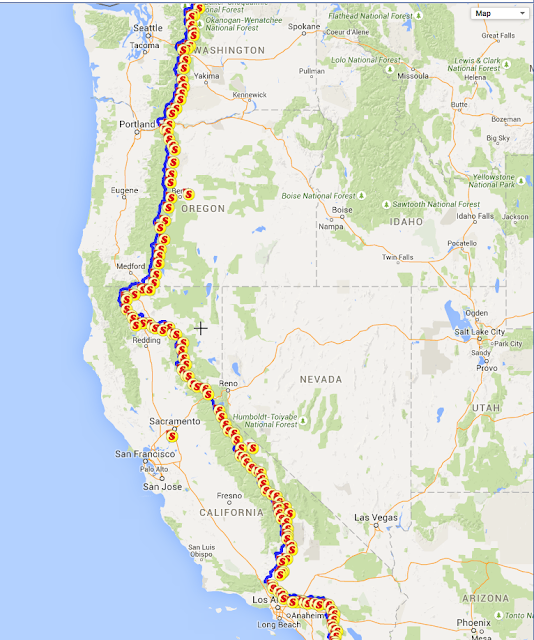 Today I'm going to take a few moments to recognize a remarkable achievement by a member of my extended family.

In early April of this year Pensioner (his "trail name") arrived at the California/Mexico border to begin a hike northbound on the Pacific Crest Trail.


The Pacific Crest Trail... is a long-distance hiking and equestrian trail closely aligned with the highest portion of the Sierra Nevada and Cascade mountain ranges... The trail's southern terminus is on the U.S. border with Mexico, just south of Campo, California and its northern terminus on the U.S.–Canada border on the edge of Manning Park in British Columbia; its corridor through the U.S. is in the states of California, Oregon, and Washington.

The Pacific Crest Trail is 2,663 mi (4,286 km) long and ranges in elevation from just above sea level at the Oregon–Washington border to 13,153 feet (4,009 m) at Forester Pass in the Sierra Nevada. The route passes through 25 national forests and 7 national parks.

Pensioner was celebrating his retirement as a Professor of Microbiology and Molecular Genetics in the University of California system.  But his decision to hike the trail was not a spontaneous whim (as suggested for Reese Witherspoon in "Wild"); he had planned this venture for about ten years, learning about equipment and food and techniques and training on shorter segments of the trail:


"I decided to follow the very specific training advice of Ray Jardine (a founding father of the ultralightweight backpacking movement and author of Beyond Backpacking and the PCT Hiker's Handbook). In January, February and March I've hiked a total of about 450 miles, with mileage and percentage of hikes with a pack both increasing each month. Pack weights have ranged from 18 to 28 pounds, and this last month 90% of my hikes were with a pack..."

Pensioner departed from the southern terminus on April 3: 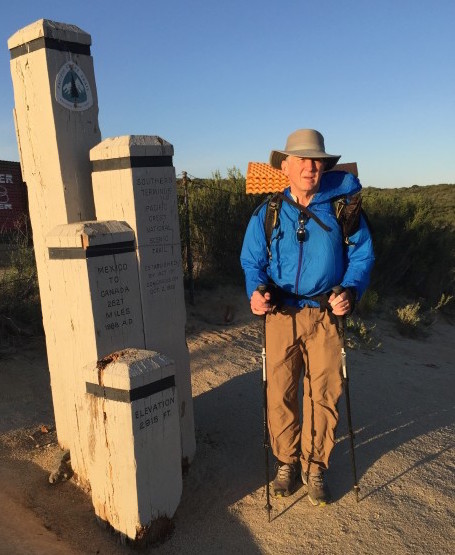 "For those attempting a NOBO thru-hike there is a fairly narrow range of times for starting at the southern terminus. Getting to the southern end of the Sierra Nevada mountains (about mile 700 on the PCT) in mid-June is the goal in a typical snow year. Arriving earlier usually means hiking in heavy snow and arriving much later risks not getting through the Cascade Mountains in Northern Washington before Winter sets in."

The above excerpts are from Pensioner's daily journal at Postholer.  He was fortunate in selecting a year when the snowpack in the Sierras was at record lows, and doubly fortunate in not encountering any of the forest fires which plagued the California, Oregon, and Washington mountain ranges this summer.

The sequence of icons on the map at the top of this post represent the points at which he triggered his SPOT 3 device to generate a signal that could be picked up by satellite to denote his location (for security as well as for documentary purposes).

A successful venture of this magnitude requires enormous amounts of planning, especially in terms of restocking food and water.  Pensioner was hiking alone and had to carry extra water for the traverses of the Southern California desert segments.  For shelter he got by mostly with a simple tarp, often "cowboy camping" in the open.

Through-hiking the trail (i.e. completing the distance in one summer) represents a remarkable feat of endurance, both physical and mental.  Fewer than 4000 people have successfully through-hiked the PCT (compared to 7,000 who have summited Everest).

On September 21 Pensioner reported that he had succesfully reached the northern terminus at the Washington/Canadian border, giving the "thumbs up" gesture in this photo - 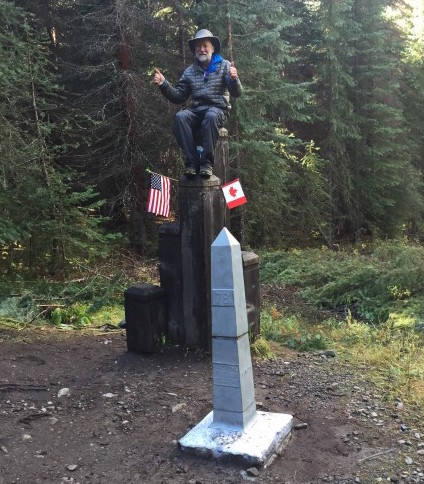 He briefly celebrated with some of the good friends he had acquired during the hike, and then perhaps channelling a bit of Forrest Gump, continued on northward in a "contemplative mood and at a leisurely pace" another 8.8 miles to Manning Provincial Park in British Columbia.