From the January 2014 issue of Harper's: 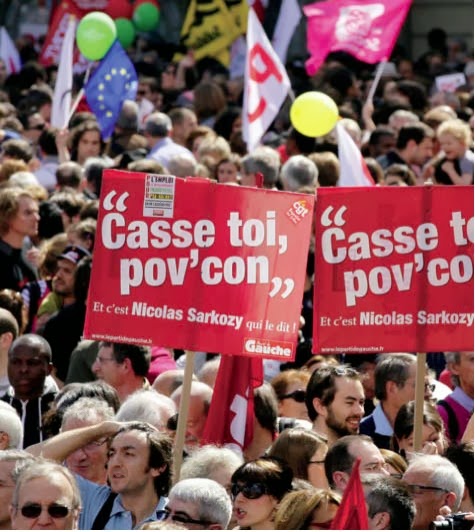 In February 2008, Nicolas Sarkozy was working the crowd at an agricultural fair near the Porte de Versailles in Paris when someone refused to shake his hand. “Don’t touch me,” the still unidentified man said. “You disgust me.” To which Sarkozy replied, “Casse-toi alors, pauvre con! ” Within twenty-four hours, a video of the exchange posted online had more than 700,000 views. “In the mouth of a French president, the expression is vulgar and devalues the office,” Louis-Jean Calvet, professor emeritus in linguistics at Aix-Marseille University, told me. “It’s like Obama, taunted in the street, responding, ‘Fuck off.’” Is it? In Le Monde, the journalist Eric Azan gleefully catalogued the anglophone press’s struggles with translating Sarkozy’s français de la rue, from the BBC’s “Get lost then you bloody idiot, just get lost!” to an Americanized take by the International Herald Tribune, “Then get lost, you poor jerk!” “The variations are infinite,” Azan wrote.

“The particular problem between French and English derives from the meager quantity of insults in French and the abundance of them in English,” said Adam Thorpe, a translator who published a new version of Zola’s Thérèse Raquin in November. Casse-toi, first recorded as a command in 1835, uses the reflexive form of the verb casser, “to break.” Con is trickier; it owes its origins to the Latin for “vulva,” cunnus, and was in common use in medieval French. “There is no doubt that the meaning of con has become trivialized and weakened over time,” Jean-Paul Colin, an editor of Larousse’s Dictionnaire de l’argot et du français populaire, told me. Now the word is mainly used to point out acts of stupidity—and is thus indispensable for anyone living in France. Richard Pevear, who translates works of Russian literature with his wife, Larissa Volokhonsky, called pauvre con “rather ordinary French slang.” “You have to find something with a similar rhetorical force, a similar spontaneity, a similar physiological sense,” he said. But to translate it literally as “poor cunt” doesn’t work for Americans, “because we don’t use the ‘c’ word that way,” as the British do. Pevear settled for “Get lost, asshole!” or “Fuck off, asshole!” Thorpe eventually went for “Get lost, you little git,” though he’d accept “asshole” for American readers. Many of the harsher translations came from critics of Sarkozy, such as Cécile Alduy, a professor of French at Stanford University, who translated the phrase as “Fuck off, dumbass” in an article for The Atlantic. When I asked Daniel Gunn, the director of the Center for Writers and Translators at the American University of Paris, for his version, he wrote back, “The short answer is I would NOT translate it into English, as I wouldn’t spend my time on anything said by or to Sarkozy.”

There's more at Harper's including how the incident led to a change in a longstanding French law against insulting the president.