A brief history of "jaywalking"


The idea of being fined for crossing the road at the wrong place can bemuse foreign visitors to the US, where the origins of so-called jaywalking lie in a propaganda campaign by the motor industry in the 1920s...

The first known reference to it dates to December 1913, says Peter Norton, a history professor at the University of Virginia and author of Fighting Traffic - The Dawn of the Motor Age in the American City. That month a department store in Syracuse hired a Santa Claus who stood on the street with a megaphone, bellowing at people who didn't cross properly and calling them jaywalkers... 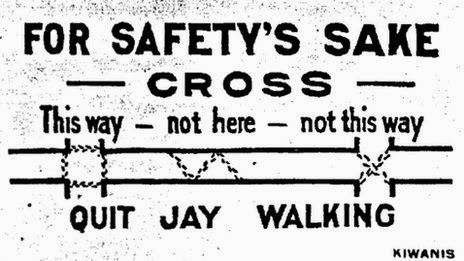 The word was first used to describe "someone from the countryside who goes to the city and is so dazzled by the lights and the show windows that they keep stopping and getting in the way of other pedestrians".

The use of jaywalking as a term of ridicule against pedestrians crossing roads took off in the 1920s.

A key moment, says Norton, was a petition signed by 42,000 people in Cincinnati in 1923 to limit the speed of cars mechanically to 25mph (40kph). Though the petition failed, an alarmed auto industry scrambled to shift the blame for pedestrian casualties from drivers to walkers...

"The newspaper coverage quite suddenly changes, so that in 1923 they're all blaming the drivers, and by late 1924 they're all blaming jaywalking," Norton says.  Soon, he adds, car lobby groups also started taking over school safety education, stressing that "streets are for cars and children need to stay out of them". Anti-jaywalking laws were adopted in many cities in the late 1920s, and became the norm by the 1930s...

"I love how I see people getting jaywalking tickets everyday at the corner of 5th and Broadway by our loft, and yet I can't walk to my car without getting offered… any variety of hardcore narcotics," wrote one woman in a message that ended "#priorities".

Advocates for walking say drivers are most often to blame for pedestrian deaths and injuries, and that there is no evidence to prove that anti-jaywalking campaigns are effective.


Jonl sez, "Streets near the University of Texas at Austin today are safer, thanks to quick and effective action by the local police, who caught and arrested a jogger, observed wearing a pony tail, black shorts, and a headset in the area. She was apparently menacing traffic by crossing the street in a manner construed as 'jaywalking,' however her apparent arrest was due to her failure to provide identification: i.e., she was guilty not just of jaywalking, but of anonymous jaywalking."

- which leads to a discussion in the comments about Americans not driving a car needing to show identity cards.