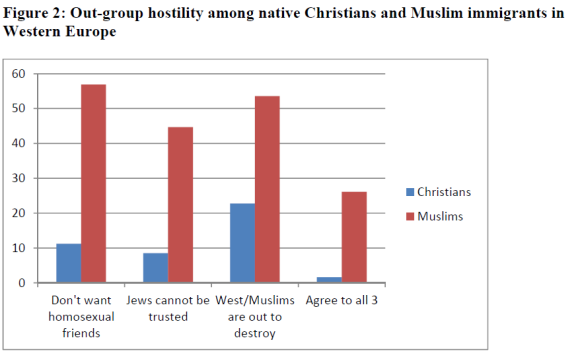 
One narrative about Muslim immigrants in Europe is that only a relatively small proportion holds views that are sometimes labeled as “fundamentalist.” Ruud Koopmans from the Wissenschaftszentrum in Berlin argues that this perspective is incorrect. He conducted a telephone survey of 9,000 respondents in the Netherlands, Germany, Belgium, France, Austria, and Sweden and interviewed both Turkish and Moroccan immigrants as well as a comparison group of Christians.

His first finding is that majorities of Muslim immigrants believe that there is only one interpretation of the Koran possible to which every Muslim should stick (75 percent), and that religious rules are more important than the laws of the country in which they live (65 percent). Moreover, these views are as widespread among younger Muslims as among older generations.

He then looks at hostility toward out-groups. Fifty-eight percent do not want homosexual friends, 45 percent think that Jews cannot be trusted, and 54 percent believe that the West is out to destroy Muslim culture. Among Christians, 23 percent believe that Muslims are out to destroy Western culture. Koopmans says these results hold when you control for the varying socio-economic characteristics of these groups (although the analyses are not presented).

Religious fundamentalism is the strongest correlate of out-group hostility both among Muslims and Christians. Fundamentalism here is taken to mean beliefs that believers should return to unchangeable rules from the past, that the Bible/Koran should be taken literally, and that religious rules are more important than secular laws. Although Muslims are more likely to be fundamentalist and hostile toward out-groups than Christians, there are many more Christians in these countries. So, the overall numbers of Christians who feel hostile toward Muslims still vastly outnumber the Muslims who believe the West is out to destroy Muslim culture.

More at the link, via The Dish, where these observations are added:


Just over 57 percent of the general American population believes that “right and wrong in U.S. law should be based on God’s laws,” compared to 49.3 percent of U.S.-born Muslims and 45.6 of foreign-born Muslims.  About a third of each group believes that society should not be the one to determine right and wrong in U.S. law.  Such numbers reveal that the general American population is more fundamentalist than the average European, and that Muslim Americans are less fundamentalist than European Muslims, according to the Koopmans study.

The bulk of Muslim immigrants in the U.S. today arrived during or after the 1990s, the large majority pursuing economic opportunities and advanced degrees. Muslim immigrants in the U.S. are thus just as wealthy as, and tend to be better educated than, the average American. This high-skilled migration flow to the U.S. stands in contrast to the low-skilled labor immigration that Western Europe attracted following World War II to help rebuilding efforts.