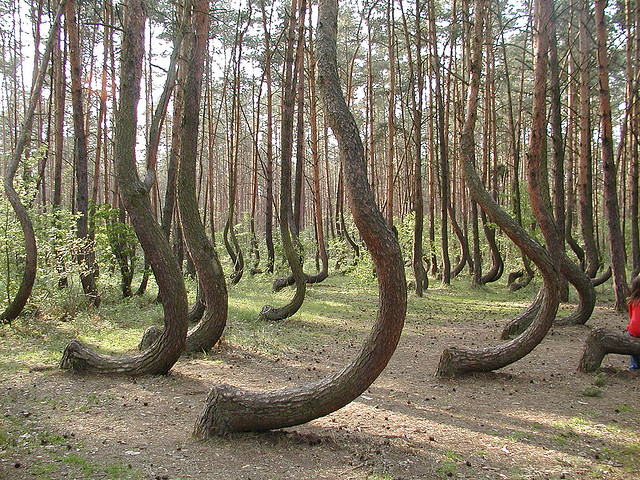 The link for the embedded photo was sent to me by Jennifer Fox, with a request for an explanation, since her web search had not proved satisfactory.

Several possibilities come to mind.  It's obvious that the trees were bent when very young, then recovered.  Those who live near large lakes with prominent ice heaves will have seen trees affected in this manner, and a similiar effect could occur after a blowdown by straightline winds.

I get the sense that this forest is a tree farm, because of the uniformity of age of the trees, and I suspect this is a man-made curvature, because of the similarity of all the trees involved.  If that's true, then my best explanation would be that these trees were trained as "compass timbers" for shipbuilding or as material for other woodworking.  See this post from last fall on that subject.

This blog gets about 500 visits a month from readers in Poland; perhaps someone can offer a definitive answer.

Addendum January 2012.  One of the curious aspects of blogging is that you never know which posts will be popular or produce sustained interest.  I posted the above about a year ago, and it has continued to accumulate hits (40,000 so far!) and comments, so I thought a repost with an update was warranted.

One of the early comments included a link to Discovery News, with a map showing the location of this forest: 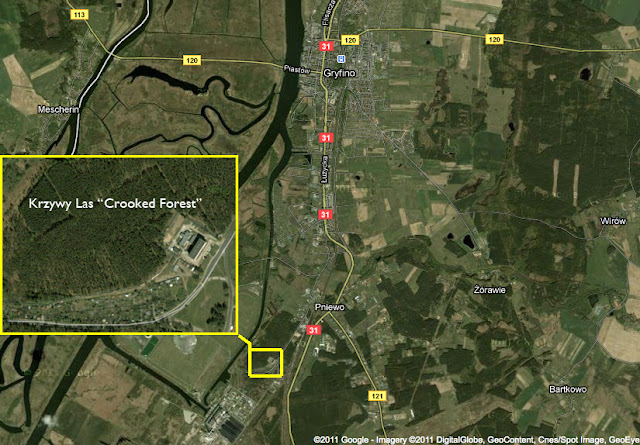 The bent trees are in a small suburban area, surrounded by normal trees (evident in some of the photos in the gallery at this link).

Re the etiology, my original postulate was that they were bent by humans for shipbuilding timbers or other woodworking.  Others chimed in with suggestions of "gravity anomalies," crop circles, the Tunguska Event (!!), "evil," and tank maneuvers.

I favor the later suggestion that the trees were intended to be used for furniture making in the "German Jugendstil style (1900/30), which is noted for its numerous curvilinear features."  Another reader offered a link to this photo of a sledge with curved wooden runners: 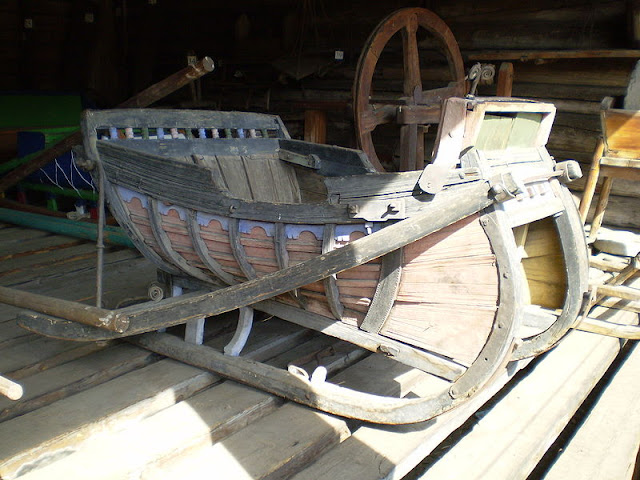 This post, for reasons not entirely clear to me, has over the years been one of the most-viewed entries in TYWKIWDBI, with something over 100,000 views.