This is a chaperon 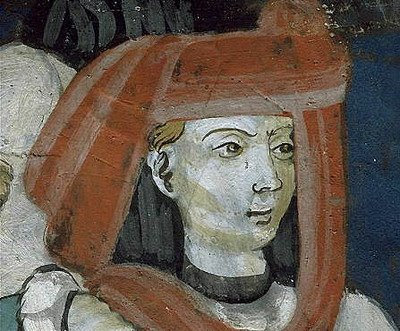 "The headgear this man is wearing is called a chaperon -- related to the modern French word chapeau... The picture is from the Chapel Saint-Erige, probably completed in the year 1451, a time when chaperons were extremely fashionable throughout Europe.

It was not until the early part of the eighteenth century that people began to use the word chaperon or chaperone to designate elderly aunts, ladies-in-waiting, or other persons charged with making sure that young people didn't get into the sort of mischief they are likely to get into when left to their own devices.

(Full credit for image and text to Scribal Terror)