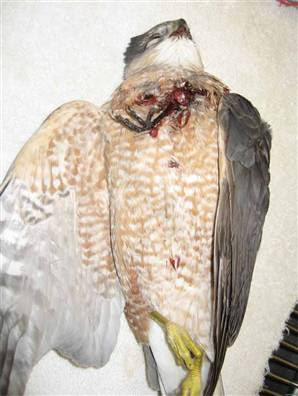 This is bizarre. I'm sure there's a more rational explanation than the one suggested in this MSNBC article, but I can't work it out right now, and will just post extracts from the text:

"A hawk was found dead along a California highway with the claw of a songbird protruding from its chest... A pouch in the hawk's chest area called the crop had ripped open and the songbird, which had been a meal for the hawk, was spilling out... "We removed a good portion of [the songbird], which was partially digested..." The hawk had apparently just finished downing what might have been a sparrow. " Birds of prey, like sharp-shinned hawks, typically leave behind the legs and head of their avian meals..."

I for one welcome our new songbird overlords. And I hope this post will at least give a moment's pause to those French barbarians who consume ortolan.

(Credit to Neatorama for finding and posting the story)