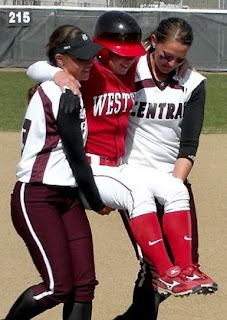 "Sara Tucholsky, a diminutive senior for Western Oregon, hit what looked like a three-run homer against Central Washington. Never in her 21 years had Tucholsky propelled a ball over a fence, so she did not have her home run trot in order, gazing in awe, missing first base. When she turned back to touch the bag, her right knee buckled, and she went down, crying and crawling back to first base.

Pam Knox, the Western Oregon coach, made sure no teammates touched Tucholsky, which would have automatically made her unable to advance. The umpires ruled that if Tucholsky could not make it around the bases, two runs would score but she would be credited with only a single.

Then Mallory Holtman, the powerful first baseman for Central Washington, said words that brought a chill to everybody who heard them:

"Excuse me, would it be OK if we carried her around and she touched each bag?"

The umpires huddled and said it would be legal, so Holtman and the Central Washington shortstop, Liz Wallace, lifted Tucholsky, hands crossed under her, and carried her to second base, and gently lowered her so she could touch the base. Then Holtman and Wallace started to giggle, and so did Tucholsky, through her tears, and the three of them continued this odd procession to third base and home to a standing ovation.

"Everybody was crying," Knox recalled Tuesday. "It was an away game, and our four fans were crying. We couldn't hit after that."