This didn't happen at a Muslim school.... 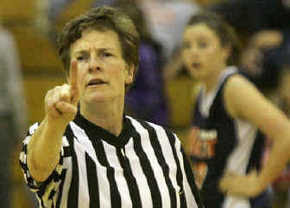 ....it was at a Catholic academy near Topeka -

The Kansas State High School Activities Association said referees reported that Michelle Campbell was preparing to officiate at St. Mary's Academy near Topeka on Feb. 2 when a school official insisted that Campbell could not call the game. The reason given, according to the referees: Campbell, as a woman, could not be put in a position of authority over boys because of the academy's beliefs.

The headmaster has subsequently spun the event differently saying it was a matter of role models, not Biblical submission of women to men. That's not what the referees were told at gametime. Since it's a private school, the administration is probably within their rights to make such a demand, but the referees are also within their rights to refuse the conditions, and I'm pleased to note that Ms. Campbell's male colleagues walked out with her.