Has the Amber Room been found? 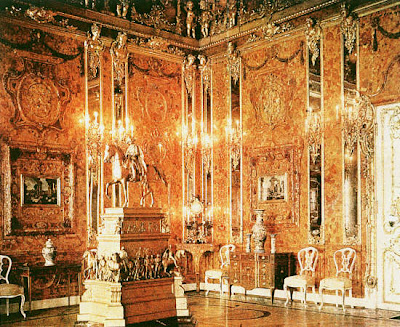 Der Spiegel is reporting that treasure hunters claim to have found a man-made cavern that may contain two tons of Nazi gold as well as the disassembled Amber Room. The mayor of the town of Deutschneudorf, where this is occuring, said the location of the cavern had come from documents of a recently deceased Luftwaffe signaller. "There was a note written next to the coordinates that the site contained Nazi party gold in 12-kilo bars. If the gold is there, the Amber Room will be too." It may take until Easter to get into the chamber because it may contain booby traps and has to be secured by explosives experts and engineers.

The Amber Room is one of the world's greatest unlocated treasures. It was created in Prussia and given to Peter the Great in 1716. During WWII it was looted by the Nazis and shipped back to Konigsberg Castle, but was "lost" during the war. Speculation was that it was inadvertently bombed or sunk in the Baltic, but there has been heated controversy about this, well summarized in the Wiki link earlier.

If this report is confirmed, the discovery will be the most spectacular news in years, though likely most Americans will pay more attention to the fate of Britney... gag-me-with-a-spoon-I-can't-finish-this-sentence......