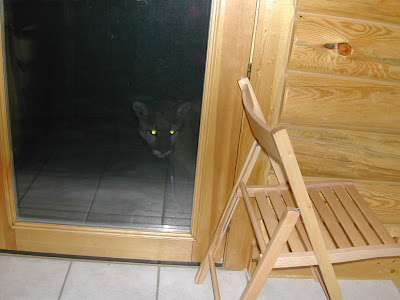 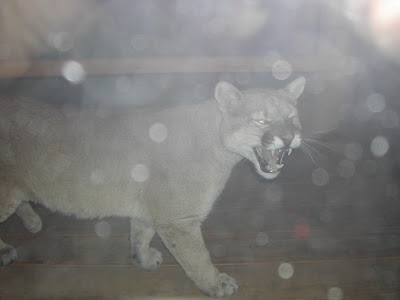 Will Rogers defined "diplomacy" as the art of saying "nice doggy" until you can find a stick. That was the thought that came to mind when I viewed these photos sent to me by a friend. The original claim was that these pictures were taken near the town of Spooner, Wisconsin, looking from the kitchen out toward the deck, with the cougar watching the family's children playing on the kitchen floor. Others have doubted the Wisconsin provenance of the images, and the second one showed up on Pizdaus, a Russian photo-storing website; as I view the first image, the wooden chair looks more European than upper-Midwest-American, so until I hear otherwise, I will assume this is a European/Russian cougar. Still, it's an impressive pair of images.

These are magnificent animals almost always harmless to humans, but the display of dentition in the second photo is a reminder of the respect that must be accorded to wildlife.