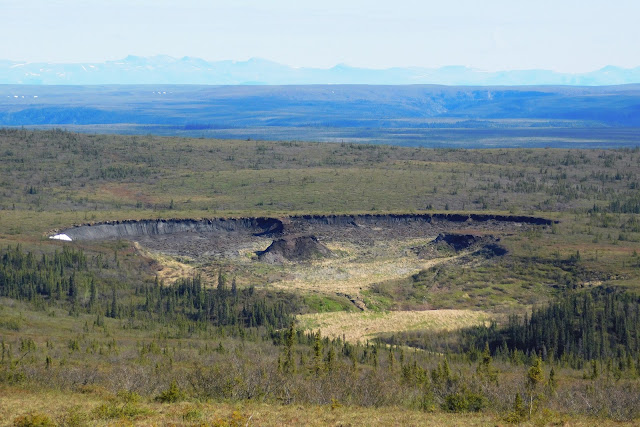 Excerpts from a recent article in Wired:


It’s perhaps the best known and more worrisome of climate feedback loops: As the planet warms, permafrost—landscapes of frozen soil and rock—begins to thaw. And when it does, microbes consume organic matter, releasing CO2 and methane into the atmosphere, leading to more warming, more thawing, and even more carbon emissions.

But here’s something you’ve probably never heard of, and it’s something not even the UN’s Intergovernmental Panel on Climate Change has really considered: thermokarst. That’s the land that gets ravaged whenever permafrost thaws rapidly. As the ice that holds the soil together disappears, hillsides collapse and massive sinkholes open up. Climate scientists have been working gradual permafrost thaw into their models—changes that run centimeters deep over decades or centuries. But abrupt permafrost thaw happens on the scale of meters over months or years. That shocks the surrounding landscape into releasing potentially even more carbon than would have if it thawed at a more leisurely pace...

When these lands thaw, they play host to a number of processes. As ice turns to liquid water, trees flood and die off. Thus more light reaches the soil, further accelerating thawing. This is in contrast to gradual thaw, when the plant community largely stays the same as the ice thaws...

The bad news is, the emissions could be the equivalent of an entire industrialized nation’s greenhouse output. The better news is, it won’t be as much as humanity’s global toll. “Even though these are hot spots of carbon release, it's going to take decades for those hot spots to become large enough to seriously impact the climate system,” says Turetsky. “But this is still something we need to take seriously.”

A related article in the Washington Post reports on the reanimation of life-forms released from melting permafrost:


Researchers in a warming Arctic are discovering organisms, frozen and presumed dead for millennia, that can bear life anew. These ice age zombies range from simple bacteria to multicellular animals, and their endurance is prompting scientists to revise their understanding of what it means to survive...

[Mosses] desiccate when temperatures plummet, sidestepping the potential hazard of ice forming in their tissues. And if parts of the plant do sustain damage, certain cells can divide and differentiate into all the various tissue types that comprise a complete moss, similar to stem cells in human embryos...

She has coaxed million-year-old bacteria back to life on a petri dish. They look “very similar to bacteria you can find in cold environments [today],” she said...


Hulking among the puny bacteria and amoebae were long, segmented worms complete with a head at one end and anus at the other — nematodes. “Of course we were surprised and very excited,” Vishnivetskaya said. Clocking in at a half-millimeter long, the nematodes that wriggled back to life were the most complex creatures Vishnivetskaya — or anyone else — had ever revived after a lengthy deep freeze.

I've lost the link, but I believe there are also concerns about the revival and dispersal of ice-age viruses.

Previously: Maybe it should be called "tempafrost" maps the locations of permafrost in Alaska.