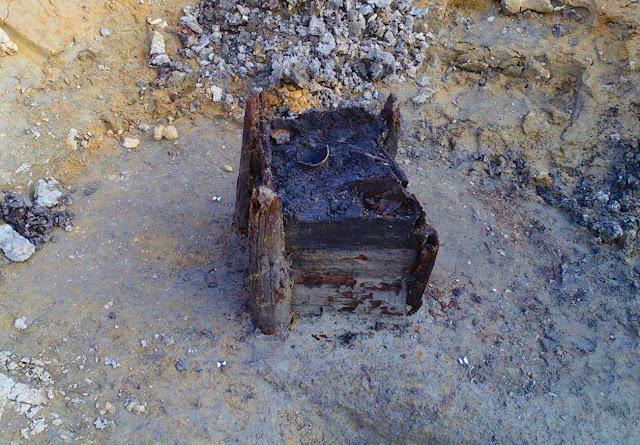 It's a well from the Neolithic period, made of oak trees.


“Today, over 40 Neolithic water wells are known in Europe,” said Mendel University researcher Michal Rybnicek and his colleagues from the Czech Republic and Germany.  These wells represent the oldest dendrochronologically dated wooden structures in the world.”

“A chest-like well lining was formed by four oak corner posts, each with two longitudinal grooves, set at 90 degrees to each other, in which oak planks were inserted horizontally in seven layers,” the archaeologists said...

“Only the upper parts yielded one clay container and a fragment of an antler. Only exceptionally, small fragments of ceramics were found in the remaining parts.”

They found that the oak trees (Quercus spp.) used for the Ostrov well were cut between 5256 and 5255 BCE. 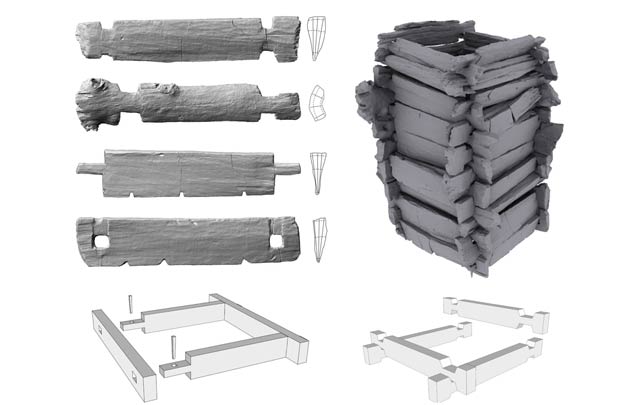 The finds, reported in a paper in the journal PLoS ONE, contradict the common belief that metal tools were required to make complex wooden structures.


The logs were split first in half with wooden wedges that were hammered in using wooden mauls. Such timber conversion has been verified experimentally for prehistoric times. There is evidence on the timber surfaces that the log halves were cut to their final length by adze work and the use of burning charcoals. Molding by fire is also a common technique in Neolithic logboat construction. The trimmed halves were then again radially or tangentially split into the final timbers. After smoothing the split timber surfaces using adzes, the boards were ready for constructional use...

This study demonstrates that the first farmers were also the first carpenters, contradicting the common belief that the invention of metal woodworking tools more than a thousand years later was imperative for complex timber constructions. Settlers of the early Neolithic time were able to build sophisticated corner joints and log constructions, which fulfilled all of the static requirements of massive water well linings.

I am truly impressed by the quality of the woodworking.